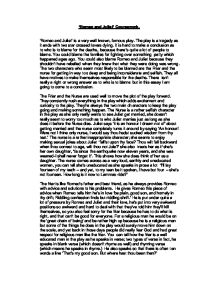 Romeo and Juliet. t is hard to make a conclusion as to who is to blame for the deaths, because theres quite a lot of people to blame. You could blame the families for fighting over something petty which happened ages ago.

'Romeo and Juliet' Coursework. 'Romeo and Juliet' is a very well known, famous play. The play is a tragedy as it ends with two star crossed lovers dying. It is hard to make a conclusion as to who is to blame for the deaths, because there's quite a lot of people to blame. You could blame the families for fighting over something petty which happened ages ago. You could also blame Romeo and Juliet because they shouldn't have rebelled when they knew that what they were doing was wrong. The two characters who seem most likely to be blamed are the Friar and the nurse for getting in way too deep and being inconsiderate and selfish. They all have motives to make themselves responsible for the deaths. There isn't really a right or wrong answer as to who is to blame but in this essay I am going to come to a conclusion. The Friar and the Nurse are used well to move the plot of the play forward. They constantly rush everything in the play which adds excitement and curiosity to the play. They're always the two main characters to keep the play going and making something happen. ...read more.

There's also the theme of sorrow and regret as the friar regrets a lot of the decisions he's made about marrying Romeo and Juliet. Another theme would be love, as this is expressed very well, as in the love Romeo and Juliet share with each other and with the friar and nurse. I would say that the main theme of the play is most likely rushing because all through the play the characters are speaking in rhyme to make everything seem more rushed. And near the end the friar says as he's rushing through the grave yard 'Saint Francis be my speed! How oft tonight have my old feet stumbled at graves!' it looks as if he' saying that he is tripping up on death'. This surely means that the message of the play would be don't rush things. Some of the scenes in the play would be quite hard to act out in a play because they're quite complicated and hard and have to be changed slightly. Like when there's a fight between Mercutio and Tybalt that would be hard to act out because it does involve a lot of movement and use of stage. ...read more.

They also put enormous amounts of pressure on the Friar and the Nurse because they threatened to kill themselves and everything which therefore made them feel responsible for the two teenagers. They were also very selfish; they didn't care much for anyone else it seemed to be all about them, but they paid the price for it. They also put their families through a lot of stress as well, and created a lot of innocent victims pay the price for what they did like Paris for example. The only crime he committed was loving and wanting to marry Juliet, he did nothing wrong but his life came to an end because of Romeo and Juliet. So really what happened to them was their fault, if they'd have taken advice from their friends and family then they'd probably of been fine. I did really enjoy this play it got me thinking a lot, it kept me interested and wanting to read on, I think that sometimes it's hard to understand what's being said because its all in old English but apart from that I think its great. It is a perfect example of a tragic play. And I did enjoy studying a lot; it creates a lot of cliff hangers so I would highly recommend reading the play, or watching the films. Aimee Vincent-Bunn. ...read more.