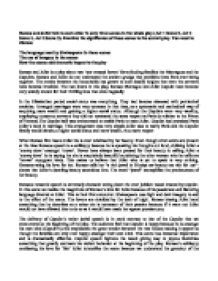 Romeo and Juliet talk to each other in only three scenes in the whole play (Act 1 Scene 5, Act 2 Scene 2, Act 3 Scene 5). Examine the significance of these scenes to the overall play.

Romeo and Juliet talk to each other in only three scenes in the whole play (Act 1 Scene 5, Act 2 Scene 2, Act 3 Scene 5). Examine the significance of these scenes to the overall play. You need to discuss: The language used by Shakespeare in these scenes The use of imagery in the scenes How the scenes add dramatic impact to the play Romeo and Juliet is a play about two 'star crossed lovers' form feuding families-the Montagues and the Capulets. Romeo and Juliet do not understand the ancient grudge that prohibits them from ever being together. The enmity between the households has grown to such deadly heights that even the servants have become involved. The two lovers in this play, Romeo Montague and Juliet Capulet have become very widely known for their thrilling love that ends tragically. In the Elizabethan period social status was everything. They had become obsessed with patriarchal societies. Arranged marriages were very common in that time, as a systematic and methodical way of acquiring more wealth and gaining a higher social status. Although the Capulets were very wealthy, employing numerous servants they did not command the same respect as Paris (a relation to the Prince of Verona).The Capulet ball was orchestrated to enable Paris to meet Juliet. Capulet had promised Paris Juliet's hand in marriage. This arrangement was very simple-Juliet was to marry Paris and the Capulet family would obtain; a higher social status and more wealth, thus more respect When Romeo first meets Juliet his is over whelmed by her beauty. ...read more.

However, belligerent Tybalt's speech is used to revive the abhorrence and brutality between the families. In act 2 scene 2 Romeo has clambered over the wall into the orchard of the Capulet family when he sees the candlelight appear in Juliet's bedroom window, which he immediately compares to the rising sun. Romeo thinks that "Juliet is the sun!" he stares at Juliet as if she were truly a source of light asking her "Arise" and "kill the envious moon". Romeo is trying to say that Juliet should rise up and shun all the envious women who shine of her beauty. Juliet confessing her love for him. He knows the dangers of his presence at the Capulet house, but is so overwhelmed with love that he doe not care. Juliet continues her diatribe until Romeo can no longer take it. He speaks out. He admits his love for Juliet. Juliet is taken aback when she hears his voice and stresses that there is great peril in him being there. They go on to make plans to wed-something that I personally think is too rash. Both are very reluctant to leave and it takes a long time until they finally part ways biding each other farewell once they have arranged to meet. The most profound use of light and dark imagery occurs in Act 2 Scene 2.this scene illustrates the flourishing romance between the lovers. ...read more.

Juliet has nothing to lose now that her father is "done with" her. We feel great sympathy for Juliet when the Nurse who she loved so dearly tells her to forget that "ditchcloth" Romeo and marry Paris. We are sympathetic towards Juliet as we can all relate to having felt alone in the world. Juliet's use of ambiguity when she swears "by St Peter's church and peter too" her mother thinks that she is just making a strong oath however the audience know that St peter decides who goes to heaven or h**l. So Juliet is swearing on the Saint that will disallow a bigamous marriage. Romeo and Juliet very brief encounter with love shocks the Elizabethan audience because won were not to be so easily won. Romeo and Juliet are inseparable both in life and death. They would rather take there lives for fear of living with out each other than live with out there love. Even the title (Romeo&Juliet) shows that not even their names can never be separated. The scenes in witch both Romeo and Juliet speak are very powerful as it contradicts the animosity that there families have for each other and brings a warmer feeling to the play. We feel that Juliet has no other potion but to take the potion that friar Lawrence has given her. At the beginning of the play we thinks it a romantic comedy due to the Nurses jokes about s*x but we quickly discover that it is a story about a forbidden love that ultimately ends in death. Iranga Tcheko ...read more.