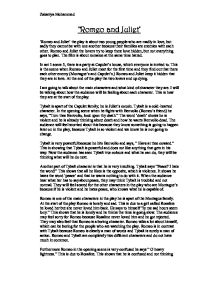 'Romeo and Juliet' 'Romeo and Juliet' the play is about two young people who are madly in love, but sadly they cannot be with one another because their families are enemies with each other. Romeo and Juliet the lovers try to keep there love hidden, but not everything goes to plan. The film is about romance at the same time hatred. In act 1 scene 5, there is a party at Capulet's house, which everyone is invited to. This is the scene when Romeo and Juliet meet for the first time and they find out that there each other enemy (Montague's and Capulet's.) Romeo and Juliet keep it hidden that they are in love. At the end of the play the two lovers end up dying. I am going to talk about the main characters and what kind of character they are. I will be talking about how the audience will be feeling about each character. This is how they are at the start of the play. Tybalt is apart of the Capulet family; he is Juliet's cousin. Tybalt is a cold-hearted character. In the opening scene when he fights with Benvolio (Romeo's friend) he says, "Turn thee Benvolio, look upon thy death." The word 'death' shows he is violent and he is already thinking about death and how he wants Benvolio dead. The audience will feel worried about this because they know something is going to happen later on in the play, because Tybalt is so violent and we know he is not going to change. ...read more.

The way Tybalt speaks shows that he is violent and not a nice character. This makes the audience tense and worried about the next part in the play. Secondly, Romeo during and after the party has changed a little, he does not talk a much. Romeo becomes more romantic when he sees Juliet he says to himself "Forswear it, sight! For I ne'er saw true beauty till this night." He is talking about Juliet, when he first saw her and how he has never she true beauty until this night. This shows he is romantic and he thinks its love at first sight. The viewers may start liking this romantic side of him. The audience may feel Romeo is a better character like this. At the party Romeo is a little impulsive. When Romeo and Juliet are together he says to her "Make blessed my rude hand" this can be found as a bit impulsive, it shows that he does not care what he is saying. When he says bless my rude hand it does not sound nice, which the audience may not like, they may also think he is too involve. On the other hand the audience may think it okay because Romeo truly loves her. Adding on Romeo is being rude he is kissing Juliet with out permission. This could cause a riot later on in the play if Capulet finds out. He could also be angry because he has already arranged Paris and Juliet to get married. ...read more.

In this scene Shakespeare creates different moods, so the audience feels different feelings in different parts of the scene. First he creates a happy mood with Capulet jokes, then it became a violent atmosphere with Tybalt when he saw Romeo, next mood was romantic and love with Romeo and Juliet. Then the last dramatic scene in act 1 scene 5 that Shakespeare created was a sad atmosphere, when Juliet finds out she loves her enemy. In the play 'Romeo and Juliet' I think the main theme was 'Love'. The main characters for this were Romeo, Juliet and Paris. Paris loved Juliet, Juliet loved Romeo, and Romeo loved Juliet. It was like a love triangle. The main scenes in the play relation to love were, meeting at the party, the balcony, Romeo and Juliet getting married and them running away together. The theme 'love' is linked to act 1 scene 5 because that is when Romeo and Juliet meet for the first time and they fall in love. That is when Paris meets Juliet and he falls in love with her. The message that Shakespeare gives relation to the theme 'love' is, that love is not everything it seems to be. You would think love is when two people who love each other be together but that not always the case. Act 1 scene 5 is important for getting across Shakespeare's message to the theme 'love' because he is saying love can be dangerous and it can cause a lot of harm not just to yourself but to other people you care about, just like it did to Romeo and Juliet. ?? ?? ?? ?? Zakariya Mohammed ...read more.