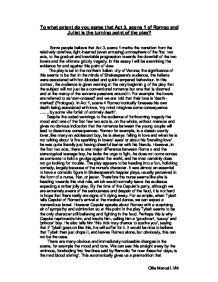 Romeo and Juliet - To what extent do you agree that Act 3 Scene 1 is the turning point of the play?

To what extent do you agree that Act 3, scene 1 of Romeo and Juliet is the turning point of the play? Some people believe that Act 3, scene 1 marks the transition from the relatively carefree, light-hearted (even amusing) atmosphere of the first two acts, to the gradual and inevitable progression towards the downfall of the two lovers and the ultimate grizzly tragedy. In this essay I will be examining the evidence for and against this point of view. The play is set in the northern Italian city of Verona; the significance of this seems to be that in the minds of Shakespeare's audience, the Italians were associated with hot-blooded and quick tempered behaviour. In this context, the audience is given warning at the very beginning of the play that the subject will not just be a conventional romance but one that is doomed and at the mercy of the extreme passions around it. For example the lovers are referred to as 'star-crossed' and we are told that their love is 'death-marked' (Prologue). In Act 1, scene 4 Romeo ironically foresees his own death being associated with love, 'my mind misgives some consequence ....... by some vile forfeit of untimely death'. Despite the coded warnings to the audience of forthcoming tragedy the mood and tone of the first few two acts is, on the whole, without menace and gives no obvious indication that the romance between the young couple will lead to disastrous consequences. ...read more.

However in this scene he is only interested in fighting Romeo. Perhaps he thought that there was no point in fighting Mercutio because he had not done enough to offend him, therefore making him a bigger person than he used to be, or perhaps, on this occasion he felt that fighting Mercutio would not be as satisfying as fighting Romeo whom he obviously despises. Tybalt knows nothing about the marriage, although Romeo gives hints, 'I love you more than you can understand until you know the reason why I love you. And so, good Capulet-which is a name I love like my own name', obviously Tybalt does not pick up on this, and even if he did, he could not expect it to be true in any way, because marriage would have been out of the question. Mercutio is a very ambiguous character. Although he is funny, witty and cheeky, he is no mere jester. He is very deep and raises many philosophical issues and dark points in the play. Mercutio ridicules Romeo, for believing in tragic fate, and romantic love. However he is still seen by many as a comic character in the play, and perhaps the comedy dies with him. Another interesting point is the fact that, Mercutio, being such a mercurial (possibly the derivation of his name) ...read more.

When he does go we are also left without his long speeches, therefore the pace of the play spirals and we are forced to concentrate on what is going on. We can see the extent of how bad the fight scene in Act 3 scene 1 really is by referring back to the brawl that took place in Act 1 scene 1. The difference is shocking; of course the first fight scene isn't completely innocent and friendly but it is a lot less vicious. You almost get the sense that they are all rather enjoying themselves. A lot of the fight is just quick-banter and extravagant (but not particularly harmful), shadow fighting. In conclusion, I believe that Act 3 scene 1 is to a large extent the hinge on which the dramatic development of the tragedy develops. Even though as an audience we were given plenty of signs in both the prologue and the first act that calamity was imminent those signs were easily overlooked in the prevailing light-hearted tone of the first two acts. It is only in Act 3 scene 1 that the play and its plot become hard-edged in terms of both character and mood. The death of Mercutio resurrects the bitter feud which in the early part of the play seemed to lie dormant. From now on the protagonists are unmasked, revenge has to be taken and the warnings of tragedy ahead turn into reality. ?? ?? ?? ?? Ollie Marcel LVM ...read more.