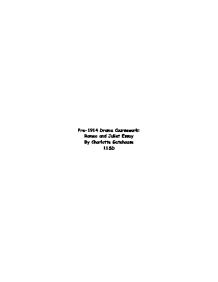 Romeo and Juliet - What different types of love are represented in the play, and how is Shakespeare drawing on historical, social and cultural features of medieval and Elizabethan Englandin the ways that he represents these types of love?

Pre-1914 Drama Coursework: Romeo and Juliet Essay By Charlotte Gatehouse 11SD GCSE English / English Literature Band X Set 1 2001 - 2003 Pre-1914 Drama Coursework: Romeo and Juliet by William Shakespeare Teacher: S Webber What different types of love are represented in the play, and how is Shakespeare drawing on historical, social and cultural features of medieval and Elizabethan England in the ways that he represents these types of love? The entire theme of Romeo and Juliet is love. The plays plot is about Romeo and Juliet's love affair, but the romantic love is not the only type of love present in the story. As well as using realistic social situations familiar to an Elizabethan audience, Shakespeare draws upon popular medieval and Elizabethan conventions of poetry, literature and art in the way that he represents the different types of love in the play. Shakespeare draws upon conventions of art and literature from the Elizabethan and medieval world, for the first type of love that appears in the play that is the Infatuation which Romeo has for Rosaline. In the opening scenes Romeo is depressed because he is in love with a woman who does not return his affections. This depression is apparent when Benvolio talks to Lord and Lady Montague about Romeo. He says, "...underneath the grove of sycamore.../ So early walking did I see your son/ Towards him I made, but he was ware of me/ And stole into the covert of the wood" (Act 1 Scene 1 Lines 112-116). This shows that Romeo is very upset about his unrequited love with Rosaline as he is pining for her as he sits under a tree and is afraid of being seen in such a state of misery. Therefore he runs from a friend, who would want no more than to ease his pain, into the cover of the wood and from the world. ...read more.

This means that her daughter repeatedly in trying to make peace with her mother by trying to speak to her, hence all the visits, but repeatedly fails because Margaret has ordered her servants not to let her in because she does not want to speak to her. Margaret has disowned her daughter just like Lady Capulet disowns Juliet in her hour of need. Similarly Lord Capulet also threatens to make her leave and disowns her after Juliet tells him she does not want to marry Paris and can give no reason why. He says, "And you be mine, I'll give you to my friend; / And you be not, hang, beg, starve, die in the streets, / For, by my soul. I'll ne'er acknowledge thee, / Nor what is mine shall never do thee good" (Act 3 Scene 5 Lines 191-194). This tells the readers that Lord Capulet has disowned his daughter because of her disobedience. Another example of paternal love is Friar Lawrence's love for Romeo. The Friar seems to act as a surrogate father and friend to Romeo as it is he who provides the kind of advice and support on a day to day bases. An example of this is when say, "Wisely and slow; they stumble that / run fast" (Act 2 Scene 3 Lines 94-95). This tells the audience that Friar Lawrence looks upon Romeo as his son and friend because he gives him advice in love like a friend and does it with Romeo's best intention in mind. Friar Lawrence does have genuine affection for Romeo, but is not scared to challenge Romeo's opinion or be blunt with him. An example of this is when he says, "Is Rosaline, whom thou didst love dear, / So soon forsaken? Young men's love then lies / Not truly in their hearts, but in their eyes." (Act 2 Scene 3 Lines 67-69). ...read more.

Again after centuries of battles and power struggles, two opposing kingdoms were drawn together as one. On Elizabeth's death James became Shakespeare's patron, so obviously making it a good idea to flatter him else he would not make a living. Possibly, and most likely, the two families in Romeo and Juliet that are at war together symbolise England and Scotland. In the end the two families are united just like Scotland and England. This is clearly a form of flattery towards the King as Shakespeare is saying that the King has accomplished this unity between two nations that once deeply hated one another. There was a struggle between Catholics and Protestants; this may also be what Shakespeare founded the hatred between the feuding families. Although James was a Protestant, he was not as radical as some of his Protestant subjects in Scotland and England. In Scotland, Protestants such as Andrew Melville supported a Presbyterian Church, which would govern itself without interference from the king. James preferred the Church of England, of which he was the head. But some of his English subjects, those associated with Puritanism, wanted the English Church to become more like the Scottish Church. In 1604 James convoked the Hampton Court Conference to answer Puritan demands for Church reform. Here he authorized a celebrated new English translation of the Bible, generally called the King James Version; he also supported the bishops of the Church of England against radical Protestant reformers. Roman Catholic disappointment with James, the son of the Catholic "martyr queen" Mary, Queen of Scots, led to the abortive Gunpowder Plot in 1605. Romeo and Juliet is a play about love, it concerns many different types of love and Shakespeare is drawing on features of every day life in Elizabethan times to show each type of love. He's drawing on history, on art, on poetry like Canterbury Tales, domestic life all things that are recognisable to the audience of the time. ...read more.