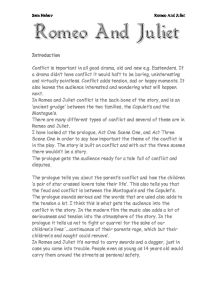 Romeo and Juliet: What dramatic function does conflict serve in this story

Introduction Conflict is important in all good drama, old and new e.g. Eastenders. If a drama didn't have conflict it would haft to be boring, uninteresting and virtually pointless. Conflict adds tension, sad or happy moments. It also leaves the audience interested and wondering what will happen next. In Romeo and Juliet conflict is the back-bone of the story, and is an 'ancient grudge' between the two families, the Capulet's and the Montague's. There are many different types of conflict and several of these are in Romeo and Juliet. I have looked at the prologue, Act One Scene One, and Act Three Scene One in order to say how important the theme of the conflict is in the play. The story is built on conflict and with out the three scenes there wouldn't be a story. The prologue gets the audience ready for a tale full of conflict and disputes. The prologue tells you about the parent's conflict and how the children 'a pair of star crossed lovers take their life'. This also tells you that the feud and conflict is between the Montague's and the Capulet's. The prologue sounds serious and the words that are used also adds to the tension a lot. I think this is what gets the audience into the conflict in the story. In the modern film the music also adds a lot of seriousness and tension into the atmosphere of the story. In the prologue it tells us not to fight or quarrel for the sake of our children's lives '...continuance of their parents rage, which but their children's end naught could remove'. In Romeo and Juliet it's normal to carry swords and a dagger, just in case you come into trouble. People even as young as 14 years old would carry them around the streets as personal safety. As the first scene comes straight after the prologue, there are the Capulet's Sampson and Gregory are each trying to prove how much better they are to one ...read more.

Mercutio gets offended and says 'O calm, dishonourable, vile submission: Alla stoccata carries it away! [He Draws] Tybalt, you rat-catcher, will you walk? '. Mercutio insults Tybalt and challenges him to fight. Mercutio then insults Tybalt and says he will kill him 'Good king of cats, nothing but one of your nine lives that I mean to make bold withal, and as you shall use me hereafter, dry-beat the rest of the eight. Will you pluck your sword out of his pilcher by the ears? Make haste, lest mine be about your ears ere be out'. Tybalt is a well known popular cats name when Romeo and Juliet were made that is why Mercutio insults Tybalt by calling him 'the king of cats'. Tybalt then accepts Mercutio's challenge - 'I am for you'. Then they fight. Romeo then tries to stop the fight - 'Draw, Benvolio, beat down their weapons. Gentlemen for shame, forbear this outrage. Tybalt! Mercutio! The prince expressly hath forbid this bandying in Verona streets. Hold, Tybalt! Good Mercutio!'. Tybalt then stabs Mercutio from under Romeo's arm. Tybalt then leaves with his men. Mercutio knows he is dieing, but the fellow Montague's don't realise as Mercutio carries on making jokes. Romeo then interferes but he doesn't realise the full extent of the wound 'Courage man, the hurt cannot be much.' Mercutio then says 'No, 'tis not deep as a well, nor so wide as a church door, but 'tis enough, 'twill serve. Ask for me tomorrow and you shall find me a grave man. In the Zeffirelli version Mercutio is trying to tell his friends that he is seriously hurt and dieing but they thought he was joking as he normally does. Mercutio then dies and Romeo learns of his death - 'This day's black fate on more ways doth depend: This but begins the woe others must read'. Tybalt enters again and Benvolio warns Romeo - 'Here comes the furious Tybalt back again'. ...read more.

This scene is not as violent as the previous, but it's just as dangerous because, as a result Romeo and Juliet die. Conclusion In Romeo and Juliet, each scene has a vital role, which eventually takes their lives and others along the way. In the first scene, the Montague's have a fight and the prince threatens to take one of their lives, and also threatens to banish someone if it continues. If this didn't happen Romeo and Juliet could be alive. In act three scene one, Mercutio and Tybalt fight for Mercutio to fall. This happens because Mercutio cannot cope with Romeo on his hands and knees, begging for Mercutio to be 'satisfied' and gets offended which then leads to him to fighting Tybalt. The reason that Tybalt is irate with Romeo is because, he saw him at the party that Mercutio gave them tickets to. Romeo cannot tell Tybalt why he loves him, because he has married his cousin (Juliet). And if he found out, Tybalt would kill Romeo. Tybalt kills Mercutio, and Romeo then kills Tybalt in revenge. This leads to Romeo to be 'banished' from Verona. This would have been avoided if Romeo didn't go to the Montague's party, which he was talked into anyway. In act three scene five, Juliet's father, Lord Capulet arranges a wedding for Juliet and County Paris, which results in Juliet and the Friar planning Juliet's counterfeit death which Romeo's friend thinks she is really dead. This then results in his friend telling Romeo that Juliet is truly dead. The Friar planned to notify Romeo by letter, but it was delayed. He kills himself and because Juliet saw Romeo die, she killed herself as well. As you can see, each scene is imperative to Romeo and Juliet's death and could also be easily avoided. From the start of the play, we know that Romeo and Juliet are destined to die, because of the prologue. Each tragedy helps this to happen. Without one of them, or a slight change, they both would still be alive. ?? ?? ?? ?? Sam Halsey Romeo And Juliet ...read more.