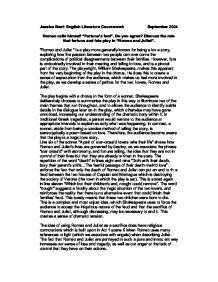 Jessica Basi: English Literature Coursework September 2004 Romeo calls himself "Fortune's fool". Do you agree? Discuss the role that fortune and fate play in "Romeo and Juliet". "Romeo and Juliet " is a play more generally known for being a love story, exploring how the passion between two people can over come the complications of political disagreements between their families. However, fate is undoubtedly involved in their meeting and falling in love, and is a pivotal part of the story. The playwright, William Shakespeare, makes this apparent from the very beginning of the play in the chorus. He does this to create a sense of expectation from the audience, which makes us feel more involved in the play, as we develop a sense of pathos for the two lovers, Romeo and Juliet. The play begins with a chorus in the form of a sonnet. Shakespeare deliberately chooses to summarise the play in this way to illuminate two of the main themes that run throughout, and to allows the audience to identify subtle details in the dialogue later on in the play, which otherwise may have gone unnoticed, increasing our understanding of the dramatic irony within it. In traditional Greek tragedies, a person would narrate to the audience at appropriate intervals to explain exactly what was happening. In contrast, a sonnet, aside from being a concise method of telling the story, is stereotypically a poem based on love. Therefore, the audience become aware that the play is a tragic love story. ...read more.

not been a masked ball, Romeo and Juliet would have recognized each other to belong of the opposite families of the feud, and may have been able to control the attraction they felt for one another due to political restraints. As it was, by the time they found out who each other was, they had succumbed to their emotions and could not control their love, as their love was already controlling them. Fate and the inevitable doom of Romeo and Juliet's love does not go completely undetected. Both of the two lovers have multiple premonitions of their death at various points throughout the play, the first belonging to Romeo prior to entering the Capulet's ball in Act 1 Scene 4: "I fear too early; for my mind misgives some Some consequence yet hanging in the stars Shall bitterly begin his fearful date With this night's revels, and expire the term Of a despis'd life clos'd in my breast By some vile forfeit of untimely death. This premonition that he has is amazingly accurate when we compare it to what happens in the rest of the play. He says that going to the ball will begin a series of events leading to his death, which is of course true as this is where he meets Juliet. He also describes his forthcoming death as "vile" and "untimely". His death is definitely untimely, as it occurs when he is little more than a child, and has only just found true love that has shaken him out of his stereotypical melancholy ways of a petrachan lover. ...read more.

It could well be fate therefore, which leads to members of both houses suffering from bereavement, as Mercutio tempted fate through cursing the houses. It is also an ironic coincidence that the reason the letter Friar Laurence sent to Romeo explaining Juliet's apparent death did not reach him, which resulted in his own death, is because the messenger became quarantined in a house carrying the plague. If Paris had not wanted to marry Juliet, she would not have needed to take the potion Friar Laurence gave her to feign her death, and Romeo would not have thought her dead. Lord Capulet also moved the wedding forward a day. If this had not had happened, Romeo would not have been shocked to hear of the death of his loved one, and thus would not have visited her in the tomb where he killed himself. Fate and fortune undisputedly plays a crucial role in the lives of all characters. Even a character as small as Paris is affected by it to the extent that he dies at the end of the play. He could have fallen for any young women in Verona, but happened to fall in love with the one girl who was in love with someone else, which led to him guarding Juliet's tomb as a mark of love and respect and Romeo killing him in order to see his wife in the tomb. Shakespeare also does this to highlight to the audience the ferocity of the family feud of Montague and Capulet, and to show just how much damage the hatred in society can do to innocent people. ...read more.