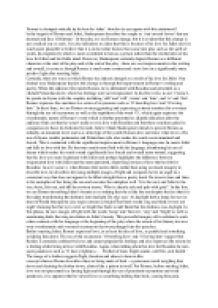 'Romeo is changed radically by his love for Juliet'. How far do you agree with this statement?

Ã¯Â»Â¿'Romeo is changed radically by his love for Juliet'. How far do you agree with this statement? In the tragedy of Romeo and Juliet, Shakespeare describes the couple as â€˜star crossed loversâ€™ that are doomed and face â€˜ill-fortuneâ€™. In the play, we see Romeo change, but it is evident that this change is not a radical one as such. It is also ridiculous to claim that this is because of his love for Juliet and it is much more plausible to believe that it is in fact other factors that come into play such as the spell of youth, his impulsivity which is more accredited to him as a person rather than the cliched idea of his love for Juliet and his fickle mind. However, Shakespeare certainly depicts Romeo as a different character at the start of the play and at the end of the play ; there are vast improvements in his writing and overall, it seems as though Romeo is much more content and views love in a significantly more positive light after meeting Juliet. Certainly, there are ways in which Romeo has indeed changed as a result of his love for Juliet. ...read more.

In act 2 scene 1, when Romeo first meets Juliet, rather than using overused imagery to describe love, he describes her using multiple images of light and compares her to an angel in a consistent way that does not appear to be lifted straight from a poetry book. He invests time and lines to his metaphor of her being the sun and executes the metaphor well. â€˜It is the east, and Juliet is the sun./Arise, fair sun, and kill the envious moon,/ Who is already sick and pale with griefâ€™. In this line, we see Romeo describing Julietâ€™s beauty as so striking that she is like the sun despite the fact that it is the night, transforming the darkness into daylight. He also says â€˜As daylight doth a lamp; her eye in heaven/Would through the airy region stream so bright/That birds would sing and think it were not nightâ€™ claiming that her eyes were so bright that birds would think that the darkness was daylight. In this phrase, he uses images of light with the words â€˜lampâ€™ and â€˜heavenâ€™, â€˜airyâ€™ and â€˜brightâ€™ as well as mentioning birds that sing in relation to Julietâ€™s beauty. ...read more.

Romeoâ€™s love for Juliet enabled him to overcome his period of misery using his â€˜wingsâ€™. Although there are ways in which Romeo has changed that cannot be accredited to his love for Juliet. Shakespeare displays Romeo as an impulsive young man with a fickle mind; one moment he is in love with Rosaline and the lack of reciprocation makes him wallow in his own pity and the next minute, he commits suicide over a girl he met four days prior. To an audience, it is clear that Romeo has an impulsive personality which would make one doubt that he has changed at all. For instance, in act 3 scene 1, the audience sees Romeo grow past the feud and attempt to make peace with Tybalt. Despite receiving hostility from Tybalt, Romeo responds with a sense of maturity saying â€˜Tybalt, the reason that I have to love thee/Doth much excuse the appertaining rage/To such a greetingâ€™. In this moment, Shakespeare initially precures to the audience that perhaps Romeoâ€™s attitude to the feud has been changed by his love for Juliet and that his love for Juliet had overcast this generational hatred between the Montagues and the Capulets. ...read more.