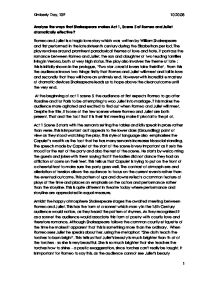 Analyse the ways that Shakespeare makes Act 1, Scene 5 of Romeo and Juliet dramatically effective? Romeo and Juliet is a tragic love story which was written by William Shakespeare and first performed in the late sixteenth century during the Elizabethan period. The play revolves around prominent paradoxical themes of love and hate. It portrays the romance between Romeo and Juliet, the son and daughter of two feuding families living in Verona, both of very high status. The play also involves the theme of fate; this is initially shown in the prologue, "Two star-cross'd lovers take their life". From this the audience knows two things: firstly that Romeo and Juliet will meet and fall in love and secondly that they will have an untimely end. However with incredible mastery of dramatic devices Shakespeare leads us to hope above the clear outcome until the very end. At the beginning of act 1 scene 5 the audience at first expects Romeo to go after Rosaline and for Paris to be attempting to woo Juliet into marriage. This makes the audience more agitated and excited to find out when Romeo and Juliet will meet. Despite the title, it is one of the few scenes where Romeo and Juliet are both present. That and the fact that it is their first meeting make it pivotal to the plot. Act 1 Scene 5 starts with the servants setting the tables and idly speak in prose rather than verse. This is important as it appeals to the lower class (Groundling) point of view as they stood watching the play. ...read more.

When Romeo and Juliet kiss, the language is densely descriptive for several reasons. If Romeo was to touch Juliet it would be considered disrespectful, so a kiss would be beyond the word controversial. Hence, Shakespeare focuses a lot of attention upon this very moment. From the text, one can infer that this kissing scene is sacred. The way lips are symbolically made out to be "pilgrims" travelling to their Saint, which is Juliet's body on some holy journey to a shrine. The journey is passion and the shrine is the pure Juliet herself. Lines such as "My lips, two blushing pilgrims..." and "For saints have hands that pilgrims' hands do touch," clearly show this view. This part of the text only describes the kissing of Juliet's hand, to 'smooth that rough touch' that Romeo's hands made upon Juliet's hands. The kiss itself was Romeo's attempt at purifying himself and Juliet subjects to this, labelling it as the answer to a prayer. The following lines show this: "Juliet - Saints do not move, though grant for prayers' sake. Romeo - Then move not, while my prayer's effect I take. [He kisses her] Thus from my lips by thine my sin is purged." Here, Juliet is saying that Saint's grant prayers, knowing well enough what Romeo longs for, and subsequently his prayer is answered. Juliet later says that she herself has been coated in this sin, and Romeo kisses her again to purify her. This shows the audience that Romeo believes Juliet to be a virgin life form, much like an angel. It is also worth noting that in most cases one can only be canonised, that is to be officially recognised as a saint by the Roman Catholic Church, after death. ...read more.

These are either the soliloquies or the stage actions, such as kissing, so the audience is somewhat forced into viewing the rest. To sum up, Act 1 scene 5 is very important because many themes of the play begin to appear in it. The scene is significant as Tybalt recognises Romeo in the crowd of people and hates him as he is a Montague. Tybalt threatens to kill Romeo but he is subsequently killed by Romeo later on in the play. The theme of love also commences in this scene as Romeo and Juliet finally meet and fall in love. The theme of love leads to the secret marriage of Romeo and Juliet. Love also leads to the theme of tragedy as Romeo is misinformed and believes Juliet is dead. The ending theme of the play is death which is, using foreshadowing, heavily hinted at throughout this scene making it important in increasing the already high tension level among the audience. Personally I admire the sheer amount of devices that are used to cleverly weave this scene together but looking back I see the shortness of the scene as its downfall. Obviously it is different when seen on stage where the sense of time between words is easier to understand but the speed from which Romeo progresses from first setting eyes on her to the "you're-the-love-of-my-life" headset is quite remarkable if slightly suspect. It's almost as if Romeo latches onto Juliet as a substitute for Rosaline. Of course during the rest of the play the affections are reaffirmed many times but for dramatic effect and the sheer rollercoaster of emotions that the audience is put through during this short excerpt it is safe to say this scene is incredibly dramatically effective. ?? ?? ?? ?? Kimberly Day, 10E 10.20.08 1 ...read more.