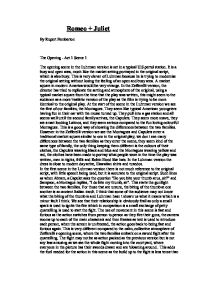 Romeo + Juliet By Rupert Pemberton The Opening - Act 1 Scene 1 The opening scene in the Luhrman version is set in a typical U.S pertol station. It is a busy and open area, much like the market setting portrayed in the original script, which is also busy. This is very clever of Luhrman because he is trying to modernise the original setting without losing the feeling of an open and busy area. A market square in modern America would be very strange. In the Zefferelli version, the director has tried to replicate the setting and atmosphere of the original, using a typical market square from the time that the play was written, this might seem to the audience as a more 'realistic version of the play as the film is trying to be more identical to the original play. At the start of the scene in the Luhrman version we see the first of our families, the Montagues. They seem like typical American youngsters having fun in their car with the music turned up. They pull into a gas station and all seems well until the second family arrives, the Capulets. They seem more suave, they are smart looking Latinos, and they seem serious compared to the fun loving colourful Montagues. This is a good way of showing the differences between the two families. However in the Zefferelli version we see the Montagues and Capulets enter a traditional market square similar to one in the original play, we don t see many differences between the two families as they enter the scene, they seem kind of the same type of family, the only thing keeping them different is the colours of their clothes, the Capulets wearing black and blue and the Montagues wearing yellow and red, the clothes have been made to portray what people wore in the time the play was written, men in tights, frills and Robin Hood like hats. ...read more.

Their love is seen as real and pure, this is helped by the use of language they use towards one another which is imaginative and flowing. Juliet appears on the balcony, and speaks of her love for Romeo, she says that she doesn t care that Romeo is a Montague, this shows the audience that the biggest factor in the pair being together peacefully cannot stop their love. The two versions are quite similar but have some obvious differences due to the modernisation of the play. First of all in Zefferelli s version, we see Juliet walk towards the edge of her balcony. She speaks of her love for Romeo, she is so in love that she calls for him knowing there s a good chance of him not returning the call, this is where the most famous line in the play comes in, 'O Romeo, Romeo, wherefore art thou Romeo? Romeo hears this as he is hiding in a near by tree, and replies to her call. Juliet is obviously startled and surprised by his appearance but is still glad to see him. She fears for Romeos safety because if he gets caught he will be in big trouble, also she wonders how Romeo got to the balcony in the first place. His answer is that love enabled him to climb the walls easily. This shows another bond between the pair in that even death cannot keep Romeo apart from Juliet. The pair exchange vowels and agree to marry with no one knowing, Romeo eventually parts from Juliet and leaves the scene. The quietness and twilighty settings of the scene also help isolate the couple from the rest of the world, the romantic music that was used in the ball scene is used once again. Juliet is wearing a nightgown, which doesn t really signify anything here, apart from maybe promoting the 'angelic theme. ...read more.

She finds Romeos gun and takes the easy way out by putting a gun to her head, she dies instantly and falls upon Romeo with her hand around him, this symbolises their togetherness to the very end. There is no Friar and no Paris in this version as I think this may lessen the impact and tragedy of this scene. In both versions, the ending is similar. The Friar speaks summarises the story and tragedy. I think he does this to try and defend that he is not the guilty party and has not committed any crime. Prince Escalus then speaks and urges the two families to make peace, which at the end is what happens. Balthasar also tries to defend himself by revealing the letter that was written by Romeo to support the friar s account and to explain the events in Mantua. I don t think that the Montagues and the Capulets were equally punished because the Capulets had lost two family members, Tybalt and Juliet, and the Montagues only one. I don t think that Mercutio s loss was that important to Lord Montague and Lady Montague as Romeos death was. The endings to both stories made the plot and play understandable to the audience with the speech at the end and of course when the two families settled their differences and made peace. I think that Shakespear would have thought that Luhrman s adaptation of his play would have presented his themes and images more clearly because Luhrman has modernised the play probably as good as if Shakespear himself directed the film if not better. The Zefferelli version I think Shakespear would have liked but just not as good as the Luhrman version My personal favourite is the Luhrman version, mainly because of the impact and creativeness of the final scene, other than that I think that the Zefferelli version is good, because it shows the audience what the play may have been like set back in Shakespears time. ...read more.