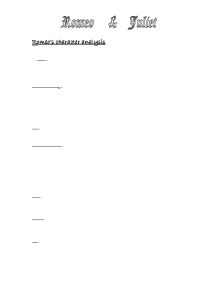 Romeo's character analysis Romeo and Juliet is a tale of two star-crossed lovers who in their love for each other were willing to sacrifice their lives. Romeo is a very temperamental person; his character develops considerably throughout the play in various ways. In this essay I shall be looking closely at Romeo's character, his intentions& abilities, the way other characters see him in the play, and finally my opinion of him. In the conversation between Benvolio and Montague in act 1 scene 1, we learn that Romeo is behaving strangely and avoiding his friends, "Towards him I made, but he was ware of me and stole into the covert of the woods." In this sentence Benvolio is explaining to Lady Montague that when he walked towards Romeo, Romeo was aware of him and hid in the woods. We know now that he was consumed by his grief about being rejected by Rosaline, he would not confide in his friends or family, as we learn from his father's words "But he, his own affections councilors, is to himself". His father also mentions that he prefers night to day "Away from light steals my heavy son, and private in his chamber pens himself, shut up his windows, locks fair daylight out, and makes himself an artificial night". This means that Romeo stays in his room all day with the curtains drawn, this also suggests that he is unhappy over something and he is sulking in his chamber much like how a child would sulk in their room. ...read more.

Romeo's character is very mature at the start of act 3 scene 1, in contrast to his immaturity in act 2, scene 3, this may be because he has just married Juliet and feels that he should be responsible and grown up, we see signs of his maturity when Tybalt challenges Romeo to a fight, Romeo refuses to accept Tybalt 's challenge, and tries to placate him. Mercutio is disgusted and angry at Romeo's refusal to fight, so he challenges Tybalt. Romeo tries to make peace but his intervention is fatal to Mercutio, Tybalt stabs him (Mercutio) under Romeo's arm. Now let's think about Romeo's behaviour and words around the time of the fight. " And so good Capulet, which name I tender as dearly as my own, be satisfied." Romeo is married to Juliet, so Tybalt is his kinsman now. Romeo tries to make peace with Tybalt even though he had deeply insulted him. I think that if Romeo were not married to Juliet he would have fought with Tybalt, but as he is married to her he feels he should be more responsible and refuses to fight triggering off the events leading to Mercrutio's death. Romeo blames himself for Mercutio's wound and is grief-stricken, and when Benvolio report's his death he is livid with rage and vows to kill Tybalt. Tybalt returns and Romeo challenges him, they fight and Tybalt is slain. Romeo acts without thinking and he is immediately regretful and conscience-stricken "O, I am fortune's fool". ...read more.

this shows again how impulsive Romeo is. Romeo goes in sees Juliet and drinks the potion and dies. Juliet wakes up and sees friar Lawrence who had come to check on her, he is nervous and want's to leave as soon as possible because the alarm has been raised that Paris is dead, Juliet refuses to come with him and he flees, Juliet finds Romeo dead and kills herself with his dagger. Thus the story ends? Conclusion Romeo is a complex character; our views of him are often changed by the course of events in this play, at some times he seems impulsive and does not think of the consequences of his actions. But at other times Romeo is thoughtful, responsible and mature. For every immature deeds he does, there always seem to be a cause, which makes us doubt if the deed was really immature. Romeo seems to have become responsible after his marriage to Juliet; he seems to feel that that he should take care of Juliet and be civil to her kinsmen. This is arguable however, because he committed suicide, which in my opinion is an easy way out but did he really have anything left to live for? Juliet was 'dead', he was banished and his mother was dead (he did not know that). So it must have seemed like his only option. Romeo's character is very puzzling, was he a selfish and spoilt boy or a man who was too consumed with grief over losing his wife? I'll leave you to figure that out. THE END ...read more.