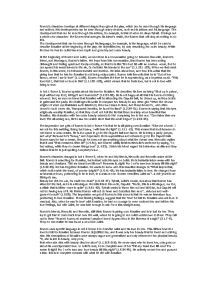 Romeo's character develops at different stages throughout the play, which can be seen through his language and actions. His developments can be seen through many devices, such as his actions and his language. The development that can be seen through his actions, for example, is that of when he slays Tybalt. It brings out a whole new character- the Romeo that avenges his friend's death, the Romeo that will stop at nothing to do this. The development that can be seen through his language, for example, is the language, which he uses to describe Rosaline at the beginning of the play. He objectifies her, by only describing her outer beauty. While the love he has for Juliet has more depth and goes beyond outer beauty. At the beginning of Romeo and Juliet, we see there is a conversation going on between Benvolio, Romeo's friend, and Montague, Romeo's father. We learn from this conversation, that Romeo has been acting distraught and feeling upset and lonely recently, so that he is like "the bud bit with an envious worm, Ere he can spread his sweet leaves to the air, Or dedicate his beauty to the sun" (1.1.151-153). When we first meet Romeo, in this scene, he behaves lovesick and lovelorn. He talks about love, and how it is unfair that the pining love that he has for Rosaline is not being reciprocated. Romeo tells Benvolio that he is "Out of her favour, where I am in love" (1.1.168). Romeo describes the love he is experiencing, as a hopeless crush. "This love feel I, that feel no love in this" (1.1.182-183), which means that he feels love, but is not in love with being in love. ...read more.

Of course we know that Romeo loves the name "Capulet" because he's just married one, but to the other young men it looks like Romeo has just turned into a wimp. Mercutio is outraged and exclaims, "O calm, dishonourable, vile submission! Alla stoccata carries it away" (3.1.73-74). Mercutio thinks that Tybalt's tough-guy act has cowed Romeo. As soon as Tybalt slays Mercutio, Romeo changes and is ashamed that he let Tybalt insult him by calling him "villain," but more ashamed that Mercutio is dying because he fought Romeo's fight. Romeo says "O sweet Juliet, Thy beauty hath made me effeminate and in my temper soften'd valour's steel!" (3.1.113-115). Basically, Romeo is ashamed that Juliet's love has made him go soft. As soon as Romeo realises that Mercutio has died he says "This day's black fate on more days doth depend; this but begins the woe, others must end" (3.1.119-120). Romeo knows he is angry and will fight Tybalt to avenge Mercutio's death. As soon as Tybalt returns he challenges him to a duel and says "Either thou, or I, or both, must go with him" (3.1.129). Romeo is determined to fight to the death for Mercutio. He kills Tybalt and flees. In Act 3 Scene 2, we see Juliet has found out about her cousin, Tybalt's, death, which her husband Romeo is responsible for. At first, she is angry with Romeo for doing such a thing, and exclaims "O serpent heart, hid with a flowering face!" (3.2.73). This means that how could Romeo look so good, but be so bad. Her mood fades, though. She sticks up for him "Blister'd be thy tongue for such a wish! ...read more.

Then follows a remarkable moment. We might expect that Romeo, Juliet's husband, wouldn't want any other man, even a dead one, lying next to Juliet, but Romeo's immediate response to Paris' request is, "In faith, I will" (5.3.74). Laying himself down beside Juliet, Romeo bids farewell to his life as he embraces her and death. He says, "Arms, take your last embrace! And, lips, O you, the doors of breath, seal with a righteous kiss a dateless bargain to engrossing death!" (5.3.115). He commits suicide. This scene is a key point in Romeo's character development, as we see his behaviour towards Paris is civilised and his behaviour towards killing him is mature. We see that when he killed Tybalt, he had no remorse, but we see here that Romeo had no intention of killing Paris, but when he did, he was mature enough to fulfil his request. He has changed dramatically and is a matured more sympathetic man. In conclusion, Romeo's character has developed dramatically throughout the play, in many ways. For example at the beginning he was an immature boy for pretending to be in love with Rosaline, but with one encounter from Juliet, he instantly matured and fell in love and became more sincere. Another example could be, he slew Tybalt and was not remorseful at all, but when he killed Paris, he was very mature to fulfil his request and be civilised towards him. Toward the end, he did acheive a more serious attitude towards life's problems, but this could be debatable, because committing suicide was not a very mature thing to do. There could have been other possibilities but Romeo's character did develop at different stages throughout the play. ...read more.