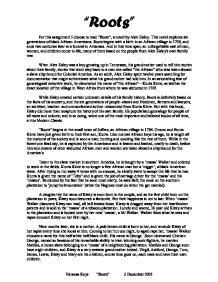 &quot;Roots&quot;, a novel by Alex Haley.

"Roots" For this assignment I choose to read "Roots", a novel by Alex Haley. This novel explores six generations of black African Americans. Roots begins with a birth in an African village in 1750, and ends two centuries later at a funeral in Arkansas. And in that time span, an unforgettable cast of men, women, and children come to life, many of them based on the people from Alex Haley's own family tree. When Alex Haley was a boy growing up in Tennessee, his grandmother used to tell him stories about their family, stories that went way back to a man she called "the African" who was taken aboard a slave ship bound for Colonial America. As an adult, Alex Haley spent twelve years searching for documentation that might authenticate what his grandmother had told him. In an astonishing feat of genealogical detective work, he discovered the name of "the African"-Kunta Kinte, as well as the exact location of the village in West Africa from where he was abducted in 1767. While Haley created certain unknown details of his family history, Roots is definitely based on the facts of his ancestry, and the six generations of people--slaves and freedmen, farmers and lawyers, an architect, teacher--and one acclaimed author--descended from Kunta Kinte. But with this book, Haley did more than recapture the history of his own family. He popularised genealogy for people of all races and colours; and in so doing, wrote one of the most important and beloved books of all time, a true Modern Classic. "Roots" begins in the small town of Juffree, an African village in 1784. Omoro and Bunta Kinte have just given birth to their first son, Kunta. Like normal African boys his age, he is taught all the customs of his society and is soon a man; hunting and cooking like the rest of them. While in the forest one fatal day, he is captured by the Americans and is beaten and bashed, nearly to death, before him and dozens of other abducted African men and women are taken aboard a ship bound for the America's. ...read more.

A pale brown child is born to her, and reminds Kizzy of her r****t every time she looks at him. Coming to her hut one night, to again r**e her, 'massa' Walker chooses a name for this half white half black child. His name is George. Soon nicknamed Chicken George, named so because of his remarkable ability to train winning c**k-fighters, he marries Matilda, a house slave belonging to a 'massa' of a neighbouring plantation. Matilda and George soon have eight children, and Kizzy is a very ecstatic grandmother indeed. Virgil, Ashford, George, Tom, James, Lewis, Kizzy and Mary are the children, and as time goes on, each mate and have their own children. The fourth son in particular, Tom, is given permission by the 'massa' to study to be a blacksmith. And a very fine blacksmith he becomes too- with customers far and wide, he is soon a very rich man. Well, actually that's not true. He would be a very rich man if he were not a 'n****r'. For every dollar Tom earns, 'massa' Walker gets it all, giving Tom only a few pennies here and there. Tom soon meets Irene, a half Indian slave and marries her, her soon bearing Tom seven children. They were (in order of age) Maria-Jane, Ellen, Viney, Matilda, Elizabeth, Tom and Cynthia. Of that second set of children, the youngest, a little girl named Cynthia, was only two years old when her father, Tom, and grandfather, Chicken George, led a wagon-train of recently freed slaves westward to Henning, Tennessee, where Cynthia met and at the age of 22 married Will Palmer. Cynthia's and Wills prayers were answered in 1895 with the birth of the sound, healthy girl whom they named Bertha George - the 'George' after Wills father. Bertha was a gifted child and it was no surprise when after completing high school (with honours), she went to an institute to study teaching- the first person to ever continue with higher education in the family. ...read more.

You will witness the brutality of the past and see historical events through a new perspective. You will feel pride as you see the human spirit triumph. Roots is an amazing story of both personal and family strength. I learnt so much from this novel that I never knew before, reading Roots was like looking through a window into their world, and looking at a whole new perspective of life. Of course, I knew about black African Americans that were used as slaves and that when the Civil War ceased, they were free. I knew about their struggle for equality and the murder of martin Luther King and Malcolm X. But after reading Roots, these things were like ants in a haystack, that's how insignificant they felt to me. Because I now knew were it all began...where everything started. Everything fell into place for me: why the Civil War started, why the blacks had so many struggles for equality, why slavery even began in the first place. This novel was like being in time machine and learning the secrets of the past. The world and society described in Roots is impossibly different from today. It is a world where people who were not white and people without money had no say in their life. They were like objects, like animals- free to be bought and sold, beaten and bashed, whenever their masters felt like it. Seeing the change in society was also remarkable in this book. From the abduction of Kunta Kinte...........then six generations later, you have an acclaimed author. It was fascinating to see the change in history and change of appreciate and equality for the blacks. Reading this book was like living in another world for a few weeks. I learnt so much, discovered so many new things, and found a new appreciation for the African Americans of today's world. After all, we have put them through so much- and just because they are black. I sincerely hope that this piece of history never ever repeats itself. Vanessa Keys "Roots" 3 December 2001 ...read more.