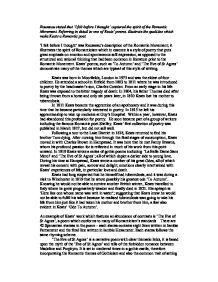 Rousseau stated that 'I felt before I thought' captured the spirit of the Romantic Movement. Referring in detail to one of Keats' poems, illustrate the qualities which make Keats a Romantic poet.

Rousseau stated that 'I felt before I thought' captured the spirit of the Romantic Movement. Referring in detail to one of Keats' poems, illustrate the qualities which make Keats a Romantic poet. 'I felt before I thought' was Rousseau's description of the Romantic Movement; it illustrates the spirit of Romanticism which in essence is a style of poetry that puts great emphasis on emotion and spontaneous self-expression, as opposed to the structured and rational thinking that had been common in literature prior to the Romantic Movement. Keats' poems, such as 'To Autumn' and 'The Eve of St Agnes' demonstrate many of the themes which are typical of this style of writing. Keats was born in Moorfields, London in 1975 and was the eldest of four children. He attended a school in Enfield from 1803 to 1811 where he was introduced to poetry by the headmaster's son, Charles Cowden. From an early stage in his life Keats was exposed to the bitter tragedy of death: In 1804, his father Thomas died after being thrown from a horse and only six years later, in 1810 Keats lost his mother to tuberculosis. ...read more.

In contrast with these images of old age and illness; Keats portrays the youth of Madeline and Porphyro. Both are "young" and Madeline is like a "splendid angel". The "lovers" have their whole lives ahead of them, unlike Angela and the Beadsman who are nearing the "end" of theirs. Another contrast within 'The Eve of St Agnes' is between opulence and poverty. The "Beadsman" is depicted as poor - he walks "barefoot" outside despite the winter weather. In direct contrast to these images of the Beadsman, the castle is described as quite the opposite. On the Eve of St Agnes, it is filled with the "rich" as they enjoy the beautiful "music" of "silver" trumpets, luxurious "woven gold" d�cor and exquisite food. There is also the image of opulence amongst Porphyro and Madeline. Porphyro lays out a "feast" of "golden dishes" filled with "cates and dainties" for Madeline. Keats appeals further to the reader's senses with the sensual comparisons he makes between the spiritual and the physical world. The Beadsman is used again to enforce the contrast between materialistic possessions and having absolutely nothing in the world but God. ...read more.

a new view of the artist as a supremely individual creator, whose creative spirit is more important than strict adherence to formal rules and traditional procedures; an emphasis upon imagination as a gateway to transcendent experience and spiritual truth; an obsessive interest in folk culture, national and ethnic cultural origins, and the medieval era; and a predilection for the exotic, the remote, the mysterious, the weird, the occult, the monstrous, the diseased, and even the satanic. Artistic and intellectual movement that originated in the late 18th century and stressed strong emotion, imagination, freedom from classical correctness in art forms, and rebellion against social conventions. Romanticism, attitude or intellectual orientation that characterized many works of literature, painting, music, architecture, criticism, and historiography in Western civilization over a period from the late 18th to the mid-19th century. Romanticism can be seen as a rejection of the precepts of order, calm, harmony, balance, idealization, and rationality that typified Classicism in general and late 18th-century Neoclassicism in particular. It was also to some extent a reaction against the Enlightenment and against 18th-century rationalism and physical materialism in general. Romanticism emphasized the individual, the subjective, the irrational, the imaginative, the personal, the spontaneous, the emotional, the visionary, and the transcendental. ...read more.