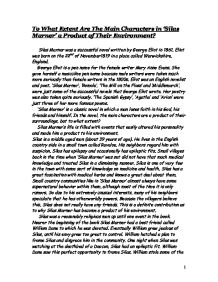 To What Extent Are The Main Characters in ‘Silas Marner’ a Product of Their Environment?

Silas Marner was a successful novel written by George Eliot in 1861. Eliot was born on the 22nd of November1819 in a place called Warwickshire, England.

George Eliot is a pen name for the female writer Mary Anne Evans. She gave herself a masculine pen name because male writers were taken much more seriously than female writers in the 1800s. Eliot was an English novelist and poet. ‘Silas Marner’, ‘Romola’, ‘The Mill on the Floss’ and ‘Middlemarch’, were just some of the successful novels that George Eliot wrote. Her poetry was also taken quite seriously. ‘The Spanish Gypsy’, ‘Agatha’ and ‘Arion’ were just three of her more famous poems.

‘Silas Marner’ is a classic novel in which a man loses faith in his God, his friends and himself. In the novel, the main characters are a product of their surroundings, but to what extent?

Silas Marner’s life is filled with events that easily altered his personality and made him a product to his environment.

Silas is a middle aged man (about 39 years of age). He lives in the English country side in a small town called Raveloe. His neighbors regard him with suspicion. Silas has epilepsy and occasionally has epileptic fits. Small villages back in the time when ‘Silas Marner’ was set did not have that much medical knowledge and treated Silas in a dismissing manner. Silas is one of very few in the town with some sort of knowledge on medicine and health. Silas has a great fascination with medical herbs and knows a great deal about them. Small country communities like in ‘Silas Marner’ almost always have some supernatural behavior within them, although most of the time it is only rumors. So due to his extremely unusual interests, many of his neighbors speculate that he has otherworldly powers. Because the villagers believe this, Silas does not really have any friends. This is a definite contribution as to why Silas Marner has become a product of his environment.

Silas was a reasonably religious man up until one event in the book. Nearer the beginning of the book Silas Marner had a best friend called William Dane to which he was devoted. Eventually William grew jealous of Silas, until his envy grew too great to control. William hatched a plan to frame Silas and disgrace him in the community. One night when Silas was watching at the deathbed of a Deacon, Silas had an epileptic fit. William Dane saw this perfect opportunity to frame Silas. William stole some of the Deacon’s money and put Silas’ knife near to where the money was. Silas was then accused of theft because of the knife.

This was a tragic event for Marner. Before this happened Silas was highly regarded in the church. He had now just lost his best friend and at the same time lost all faith in God. From then on he believed that “there is no just God that governs the earth righteously, but a God of lies, that bears witness against the innocent.”  This betrayal has deeply affected his confidence and trust in people and has also made him the sort of person that he is now.

Throughout the book Silas has an obsession with his guineas. He works endlessly for them, yet he never spends any. These coins are a sort of replacement for those he has lost or those who have deserted him. Silas Marner treasures the coins as dearly as he feels that they are a sort of friend that could never let him down or betray him like William Dane. Dane is clearly the cause of Marner’s obsession.

At the start of the book Silas began as an outcast but towards the end of the book, Silas finds love again through a child called Eppie. Eppie is the child of Mollie Farren and Godfrey Cass (of whom I will talk about in a minute). Silas finds Eppie on his front doorstep and in the distance he sees a body lying face down in the snow. It turned out to be Eppie’s mother (Molly Farren). Silas then feels extremely sorry for the young girl, resulting in him adopting her. Gradually Silas and Eppie’s bond grows stronger. Silas now has replaced his love for his guineas for his love for Eppie. Eppie really changes Silas’ life and makes him feel true love again. Some sixteen years later Godfrey Cass reveals to Eppie that he is in fact her biological father, not Silas. Godfrey then goes on to ask Eppie whether she wishes for her to live with him or not. She then refuses and wishes to continue her life with Silas. I think this definitely shows how Silas has changed due to his surroundings. He has gone from an extremely weird, hostile man to a friendly, loved man who has now made the villagers of Raveloe have second thoughts about him. All this has changed fro Silas because of his surroundings, Because of Eppie.

The father of Eppie, as I said before is Godfrey Cass. Godfrey is the eldest son of Squire Cass. Godfrey is good-natured but selfish and weak-willed. He knows what is right but is unwilling to pay the price for obeying his conscience. He has a malicious younger brother called Dunstan Cass (referred to as Dunsey).

In the story Godfrey marries an opium addict, (Mollie Farren). Godfrey is very unhappy in this relationship and only perseveres with it because he is guilty. Also when he has a child (Eppie) he feels that it would be wrong to leave them. Godfrey doesn’t tell his father about his relationship with Mollie because he knew that his father was sure to disapprove of the whole thing. Godfrey’s relationship with Mollie contributes to make him the person that he is now. Godfrey is now filled with guilt and runs a life of secrecy. He is paranoid and feels like he is tied down, he feels that his commitments should be with Farren and his daughter. He is a product of his environment because he has been secretive towards his father; this has made him into a generally secretive and paranoid person.

Godfrey’s younger brother found out about Godfrey’s and Mollie’s relationship and blackmailed him at any opportunity. This also helped Godfrey to become what he is now. Paranoid, Scared and has almost turned him into a sort of ‘apple polisher’ for Dunsey.

Later on, Godfrey wishes to leave Mollie for Nancy Lammeter (a daughter of a wealthy land owner). He knew that his father would approve of this relationship. Although he wishes to be with Nancy he lacks moral courage to leave Mollie. He lacks this courage because of his upbringing and his surroundings. His father was clearly very strict on him, and he felt like her always had to impress. Also the constant blackmail from his brother might have decreased his confidence.

Dunstan Cass, as I have said is a very malicious man. The reason he is what he is, is defiantly because of Godfrey. Dunsey treats Godfrey so badly, simply because he is envious of his brother and the relationship he has with their father. Godfrey is seen as the perfect child by his father, Squire Cass, whereas Dunsey is seen as the bad one of the two. So at every opportunity that Dunsey has he will try and make Godfrey’s life as difficult as he can. The fact that Godfrey was married to Mollie was a perfect opportunity to do so. I don’t think there are many other reasons as to why Godfrey is a product to his surroundings other than the previous.

In conclusion I think that the novel ‘Silas Marner’ makes nearly all its characters a product of their surroundings. It does this in a very clever and effective way. Since Silas Marner is the main character he is focused on the most in this way. George Eliot creates a great story using this technique and although it was a reasonably difficult book to follow it had a good storyline if it was explained. Then I could tell a lot easier how the characters were a product of their environment.