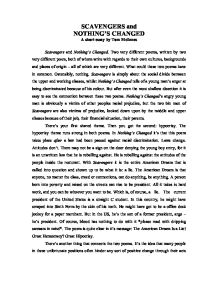 SCAVENGERS and NOTHING'S CHANGED A short essay by Tom McInnes Scavengers and Nothing's Changed. Two very different poems, written by two very different poets, both of whom write with regards to their own cultures, backgrounds and places of origin - all of which are very different. What could these two poems have in common. Ostensibly, nothing. Scavengers is simply about the social divide between the upper and working classes, whilst Nothing's Changed tells of a young man's anger at being discriminated because of his colour. But after even the most shallow disection it is easy to see the connection between these two poems. Nothing's Changed's angry young man is obviously a victim of other peoples racial prejudice, but the two bin men of Scavengers are also victims of prejudice, looked down upon by the middle and upper classes because of their job, their financial situation, their parents. There's your first shared theme. Then you got the second: hypocrisy. ...read more.

But in the US, he's the son of a former president, argo - he's president. Of course, blood has nothing to do with it *please read with dripping sarcasm in mind*. The poem is quite clear in it's message: The American Dream Is a Lie! Great Hemocracy? Great Hipocrisy. There's another thing that connects the two poems. It's the idea that many people in these unfortunate positions often hinder any sort of positive change through their acts of rebellion. For example, the boy feels mistreated by the people in the resturant. He knows that they think of him as a lesser being, as a less civilised, less intelligent, less worthy human. He does not want them to feel this way. How does he deal with this? He tosses a stone at the window. Now, one must remember that he is fighting a state-of-mind, here, and by breaking that window he has more or less proved true that erroneous state-of-mind. ...read more.

The same can be said of Scavengers. The bin men appear to be quite awed by the flash car, the pretty girl, all the riches. They seem to pander to the idea that the richer you are, the better you are. They seem to believe that yes, these beautiful rich people are better than us because they have a Mercedes. It the suppressed are infact only supressed because they buy into the supression, if the rebels are hindering change, how can change ever be bought about? And there you have it. The most superficial of analysations has already given us those three points to ponder, and most importantly it only took 20 minutes. So, if it's a total bloody shambles, I'd be happy to rewrite it. I just didn't want to come into your lesson this morning with nothing for you at all, so surely it's the thought that counts...well, okay maybe not. And yes, as you may have realised, I'm just writing this conversational little conclusion thing so that i can reach one thousand words, a goal I will have accomplished as of the next word. Zooaphile. ...read more.