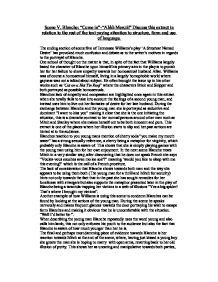 Scene V, Blanche: &quot;Come in&quot;-&quot;Ahhh Merciii&quot; Discuss this extract in relation to the rest of the text paying attention to structure, form and use of language.

Scene V, Blanche: "Come in"-"Ahhh Merciii" Discuss this extract in relation to the rest of the text paying attention to structure, form and use of language. The ending section of scene five of Tennessee Williams's play 'A Streetcar Named Desire' has provoked much confusion and debate as to the writer's motives in regards to the portrayal of Blanche. One school of thought on the matter is that, in spite of the fact that Williams largely based the character of Blanche upon himself his primary aim in the play is to punish her for her failure to show empathy towards her h********l husband Allan. Williams was of course a h********l himself, living in a largely homophobic world where gayness was not a talked about subject. He often brought the issue up in his other works such as 'Cat on a Hot Tin Roof' where the characters Brick and Skipper and both portrayed as possible homosexuals. Blanches lack of empathy and compassion are highlighted once again in this extract when she totally fails to take into account the feelings of a second young man, and instead uses him to live out her fantasies of desire for her late husband. ...read more.

"Well I'd better be-". When describing the young man Blanche repeatedly uses the word young and also calls him lamb, this not only enforces his youth to the audience but also the fact that Blanche is aware of how much younger than her he is. The final and perhaps most damming piece of evidence towards Blanche is her reaction towards Mitch at the end of the scene, where, having just kissed a young boy she greets the man she is hoping to marry with open arms, reverting back to her old illusion of purity. This shows her as uncaring and manipulative towards both parties, in the she takes on the roll of two completely different people to get what she wants. It also presents a hint that Blanche is lying about her s****l history. Blanches actions in this extract could also be seen as an example of deliberate cruelty, in so far as she is willing to take advantage of a confused and reluctant young man just for her own pleasure. Blanche has of cores been guilty of deliberate cruelty in her past when she spoke of her revulsion towards Allan "I know. ...read more.

Earlier is the scene the audience sees Blanche looking in the mirror she is later to smash, showing emphasising her fragility about her looks. She also talked to Stella about her fading appearance "I - I'm fading now". The audience has also been privy to Blanches hatred of light "I can't stand a naked light bulb" and her need to hear positive remarks about her appearance "I was fishing for a compliment Stanley". Another factor that must be considered is that previously in the scene Stanley has begun to tear down the illusions Blanche weaves to protect herself be hinting that he knows about her past actions (Again hinting that Blanche is lying about her past) "Shaw is under the impression that he met you in Loral" leaving her exposed and in a state of hysteric shock shown by her frequent pauses in sentences and trembling "her hand shakes so it almost slips form the glass". Perhaps the most likely explanation for this why this scene seems to show Blanche is two contradictory lights however is that Williams is deliberately leaving it ambiguous, allowing the audience to decide upon their own feelings towards Blanche, and that the true purpose of this scene is to prefigure the revelations about Blanches past, particularly her relationship with the 17 year old boy that lost her her job. ...read more.

This is an impressive essay, including many quotations and cross references to show the writer's knowledge of the text. The arguments are relevant and wide ranging, showing a sophisticated understanding of the ideas discussed. ****