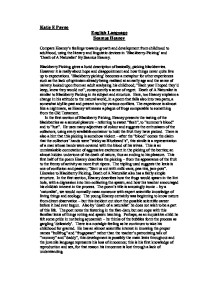 Katie E Payne English Language Seamus Heaney Compare Heaney's feelings towards growth and development from childhood to adulthood, using the literary and linguistic devices in 'Blackberry-Picking' and 'Death of A Naturalist' By Seamus Heaney. Blackberry Picking gives a lucid description of basically, picking blackberries. However it is really about hope and disappointment and how things never quite live up to expectations. 'Blackberry picking' becomes a metaphor for other experiences such as the lack of optimism already being realised at an early age and the sense of naivety looked upon from an adult analysing his childhood; "Each year I hoped they'd keep, knew they would not", consequently a sense of regret. Death of A Naturalist is similar to Blackberry Picking in its subject and structure. Here, too Heaney explains a change in his attitude to the natural world, in a poem that falls also into two parts, a somewhat idyllic past and present torn by various conflicts. The experience is almost like a nightmare, as Heaney witnesses a plague of frogs comparable to something from the Old Testament. In the first section of Blackberry Picking, Heaney presents the tasting of the blackberries as a sensual pleasure - referring to sweet "flesh", to "summer's blood" and to "l**t". He uses many adjectives of colour and suggests the enthusiasm of the collectors, using every available container to hold the fruit they have picked. ...read more.

The haunting memories are things in which he has developed in later life, suggesting how a natural childhood may contain disappointments that will haunt you forever. The onomatopoeia of 'slap' and 'plop' are harrowing resonances and create the realism of the poem. He had an overwhelming fear that, if he puts his hand into the spawn again, it will seize him; 'kings' this noun is a connotation of power and superiority, he feels like an impostor; idealistic time has gone leading to this sense of intrude. This section appears like a punishment from offended nature for the boy's arrogance. This part of the poem is ambiguous - we see the horror of the plague of frogs, "obscene" and "gathered...for vengeance", as it appeared to the young boy. There are clear connotations with war, and the blunt language suggests how his fascination has now turned into fear. Ultimately the idealistic time has gone leading to an unfamiliar anxiety. However we can also see the scene more objectively. If we strip away the effect of imagination, we are left with a swarm of croaking amphibians. This may bring out a difference between an adult Heaney relating back to his childhood in the 1940's. He again creates a loss of ideals and fear of a violent world surrounding him: pre-modifier "angry frogs", dynamic verbs such as "sickened", "ran" suggesting fear. ...read more.

He shows the rationality of death and how it is a natural part of life. The last line of Blackberry Picking, "Each year I hoped they'd keep, knew they would not" shows the reader that each year the boy would not trust that the berries would stay good but deep down remembers how he had been betrayed the previous times and prepares himself for yet another disappointment. Through Heaney's distinctive subject specific lexis of nature in both poems, he can prove that the surroundings you become accustomed to, as a child will remain with you as an adult. Being inquisitive and fascinated by the simplest natural developments (ripening of a berry) allows him to relate the growth and development of nature to himself. He obviously has vivid images of precise moments in his childhood and as an adult attempted to analyse his thoughts. Each year the 'berries would ripen' and go and the 'frogs' are fundamentally "adults" to tadpoles. I feel his childhood fear of the maturity in the 'berries ripening' and apprehension of the "adult" frogs is actually a fear of 'growing -up'. He builds an ongoing theme of time and year after year as the berries age so do the children. Disappointments are expected in early learning and his ability to return forces him to acknowledge his growth and development into an adult as a 'natural' part of life. ...read more.