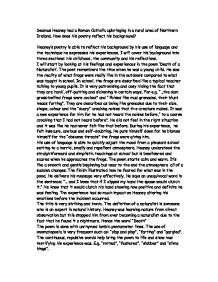 Seamus Heaney had a Roman Catholic upbringing in a rural area of Northern Ireland. How does his poetry reflect his background?

Seamus Heaney had a Roman Catholic upbringing in a rural area of Northern Ireland. How does his poetry reflect his background? Heaney's poetry is able to reflect his background by his use of language and the technique he expresses his experiences. I will cover his background into three sections: his childhood, the community and his reflections. I will start by looking at his feelings and experiences in the poem 'Death of a Naturalist'. The poet remembers the time when he was a young child. He saw the reality of what frogs were really like in the outdoors compared to what was taught in school. In school, the frogs are described like a typical teacher talking to young pupils. It is very patronising and cosy hiding the fact that they are 'rank', off-putting and sickening in certain ways. For e.g. "...the d*m gross-bellied frogs were cocked" and " Poised like mud grenades, their blunt heads farting". They are described as being like grenades due to their size, shape, colour and the "scary" croaking noises that the creature makes. It was a new experience for him for he had not heard the noises before," to a coarse croaking that I had not heard before". He did not feel in the right situation and it was like he had never felt like that before. During his experience, he felt insecure, anxious and self-doubting. He puts himself down for he blames himself for the "obscene threats" the frogs were giving him. His use of language is able to quickly adjust the mood from a pleasant school setting to a horrid, smelly and repellent atmosphere. Heaney understood the straightforward and simplistic teachings at school but is bewildered and scared when he approaches the frogs. The poem starts calm and warm. It's like a smooth and gentle beginning but near to the end the atmosphere all of a sudden changes. ...read more.

I quote; "Ducking him tenderly", showing that she did care for the newborn but couldn't keep it because of what her religion would do to her. She tries to make the death of the baby as painless as possible. Nevertheless, Heaney paints the picture that the mother was grieving and emotionally heart-broken during the process. The sentence; "Tearing her open" can be related metaphorically (emotionally) and physically (the birth). It was emotionally painful of having to kill her baby, to give birth in agony and at the same time realising that death will follow soon after. Heaney brings about so much tension and horror in his poem. It is delivered by striking the reader with constant awful details to the death of the child. The mother murders the baby just after birth. Because it is an illegitimate birth the baby is not baptized and therefore is condemned to limbo. He brings more detail by suggesting that limbo like the sea. E.g. "A cold glitter of souls". The sea is cold, dark and the souls are like fish. Even Christ Himself feels his wounds and cannot draw near the drowning sight as though he never intended such an act to be performed under the sign of His cross. It reminds us of the sacrifice Christ had to endure. Its delivers such an impact on the reader to give a glimpse of what people would be forced to do in the poet's time. By killing the baby may have been the morally right method to choose rather than keep a helpless child in a henhouse. This left him to be illiterate, unable to speak and grow up to behave to his dark surroundings. Bye-Child gives an impression of what it would have been liked if the mother kept her baby. It makes the reader ask himself/herself if the mother was morally right in doing what she did. ...read more.

This is possibly to imply that she is not the one in power and must therefore be the victim. "her blindfold a soiled bandage" shows how this is related to the conflict in Northern Ireland. The bandage is associated with conflict and he secretly hides that nothing has changed with all the conflict that has happened in modern day life and previous times. This poem is related to the Tollund Man. It is well built and descriptively written letting the reader know that violence is still going on yet no one stands up for it. The horror of this incident is shown by constant repetition of all the bad that's done to the poor girl. Heaney cannot see the beauty of this young woman because black, sticky tar has covered her face. She is a victim of this incident and he refers to her as being "My poor scapegoat". He is taking possession of this woman for he felt for her deeply which is noticed from the sentence; "I almost love you". Even though he loves her he had to stone her because adultery is a sin. Even though he is fascinated by her he knows he shouldn't be because she has done wrong. Even though he feels so deeply of this girl he realises how foolish he was by letting them carry on with the punishment; "I who stood dumb". In some cases Heaney is able to use oxymoron in order to describe how society can be a catastrophe at times. He uses the descriptive words "civilized outrage" to show this. He puts two opposite words together to form a different meaning. Hence the word "civilize" and "outrage". Heaney has experienced many tragedies in his life from "Mid Term Break" to "Punishment". He clarifies this using his own expertise of writing to create descriptive poems like these. What must be said about him is how he is talented enough to deliver what is suppose to be delivered, very effectively in order for a reader like me to have such an impact on what is said. ...read more.