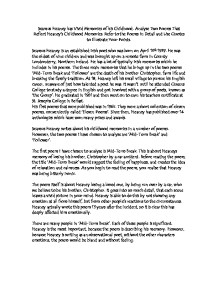 Seamus Heaney has Vivid Memories of his Childhood. Analyse Two Poems That Reflect Heaney's Childhood Memories. Refer to the Poems In Detail and Use Quotes to Illustrate Your Points.

Seamus Heaney has Vivid Memories of his Childhood. Analyse Two Poems That Reflect Heaney's Childhood Memories. Refer to the Poems In Detail and Use Quotes to Illustrate Your Points. Seamus Heaney is an established Irish poet who was born on April 13th 1939. He was the oldest of nine children and was brought up on a remote farm in County Londonderry, Northern Ireland. He has a lot of typically Irish memories which he includes in his poems. The three main memories that he brings up in the two poems 'Mid-Term Break and 'Follower' are the death of his brother Christopher, farm life and breaking the family tradition. At 18, Heaney left his small village to pursue his English career, unaware of just how talented a poet he was. It wasn't until he attended Queens College to study a degree in English and got involved with a group of poets, known as 'the Group'. He graduated in 1961 and then went on to earn his teachers certificate at St. Josephs College in Belfast. His first poems that were published was in 1965. They were a short collection of eleven poems, conveniently called 'Eleven Poems'. Since then, Heaney has published over 14 anthologies which have won many prizes and awards. Seamus Heaney writes about his childhood memories in a number of poems. However, the two poems I have chosen to analyse are 'Mid-Term Break' and 'Follower'. The first poem I have chosen to analyse is Mid-Term Break. This is about Heaneys memory of losing his brother, Christopher by a car accident. Before reading the poem, the title 'Mid-Term Break' would suggest the feeling of happiness, and creates the idea of relaxation and calmness. As you begin to read the poem, you realise that Heaney was being bitterly ironic. The poem itself is about Heaney losing a loved one, by being run over by a car, who we believe to be his brother, Christopher. ...read more.

It goes on to talk about the ambulance coming to drop off his brother. In the second line, Heaney refers to his brother as a 'corpse'. He does this to disassociate himself from the body by calling it a 'corpse' instead of his brother. In the last line, Heaney uses the words 'Stanched' and 'bandaged' to emphasise to stopping of blood, and metaphorically the stopping of human life. In stanza six, the mood has totally changed. Heaney was able to do this so definitely by using specific words to soften and calm the mood. The main words he used were 'snowdrops', 'candles' and 'soothed'. These words give quite poignant imagery, making the mood more tranquil. The next stanza is started with enjambement, to keep the poem flowing and to keep the mood the same. It uses personification in the first line to describe the bruise on his dead brothers' head: 'Wearing a poppy bruise on his left temple'. This creates powerful imagery of Heaneys' dead brother and makes the mood even more disheartening. In the second line he uses a contrast of death and life, by comparing a coffin and a cot. 'He lay in the four foot box as in his cot' This shows that Heaney has a very cynical outlook on death. It isn't only till the second to last line when we find out just how his brother was killed. I think Heaney did this to create suspense. Heaney breaks the tradition of the three line stanza, by having just one line at the end. This was to add shock, because in the last line, you actually realise it was a four year old child who has been killed. 'A four foot box, a foot for every year.' Heaney also uses assonance in this line to add effect. Also, the last two lines of the poem rhyme, which is different to the rest of the poem. As a whole the poem has an erratic rhyme scheme, which reflects Heaneys own emotions. ...read more.

It could also be on its own, because he could be remembering the point in his life when he decided to break the family tradition, and so portrayed that by breaking the tradition of the four line stanza in the poem itself. At the end of this stanza he uses enjambement to help the current mood of the poem to continue.. In stanza seven it is clear that Heaney no longer wants to be a farmer, and it changes into the present, by using the phrase 'But today...'. The last line of the poem is significant and has different interpretations: 'But today, it is my father who keeps stumbling behind me and will not go away' In this line the tables have completely turned. It could mean that Heaneys father is old and is stumbling behind him wherever he goes, but mainly that Heaneys father now watches as Heaney works and could admire him. It is significant, because it shows that Heaney and his father are still in contact and so Heaneys' father must have forgiven Heaney for breaking the family tradition. This poem creates very vivid powerful images and gives the impression that Heaney is now quite resentful towards his father. It is a circular poem which uses a wide range of vocabulary, such as specialized terms from ploughing: 'wing', 'sock, 'headrig', and colloquial vocabulary. The theme of growing up is a main factor of this poem along with the theme of family. The two poems, 'Mid-Term Break' and 'Follower' have many similarities in themes, literary devices and style. The themes that both poems use are the themes of family and childhood memories. Both poems are emotionally detached and are bitter about his father. The language used is blunt and to the point, and both poems are wrote in first person narrative. Heaney is able to show the progression of time extremely well and use enjambement to help both poems flow. The poems also have many differences. For example, 'Mid-Term Break' uses the iambic pentameter and 'Follower' uses the iambic tetrameter. ...read more.