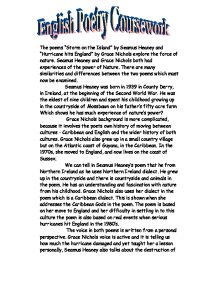 The poems "Storm on the Island" by Seamus Heaney and "Hurricane hits England" by Grace Nichols explore the force of nature. Seamus Heaney and Grace Nichols both had experiences of the power of Nature. There are many similarities and differences between the two poems which must now be examined. Seamus Heaney was born in 1939 in County Derry, in Ireland, at the beginning of the Second World War. He was the eldest of nine children and spent his childhood growing up in the countryside of Mossbawn on his father's fifty acre farm Which shows he has much experience of nature's power? Grace Nichols background is more complicated, because it involves the poets own history of moving between cultures - Caribbean and English and the wider history of both cultures. Grace Nichols also grew up in a small country village but on the Atlantic coast of Guyana, in the Caribbean. In the 1970s, she moved to England, and now lives on the coast of Sussex. We can tell in Seamus Heaney's poem that he from Northern Ireland as he uses Northern Ireland dialect. He grew up in the countryside and there is countryside and animals in the poem. He has an understanding and fascination with nature from his childhood. Grace Nichols also uses her dialect in the poem which is a Caribbean dialect. ...read more.

In Grace Nichols poem certain line are on their own e.g. "O why is my heart unchained" one stanza is in third person narrative and the rest of her poem is written in first person. The use of the third person narration in the opening stanza emphasises the distance and isolation she feels from England and in Seamus Heaney's the first person narration emphasises the sense of community. The imagery is similar because it is mostly nature imagery. The imagery makes you feel as if you were there. The poets use a lot of violent imagery. In Grace Nichols," Reaping havoc" and "what is the meaning of trees falling down like whales" emphasise the shear height and weight of the trees as they fall in the storm. The metaphor" As sweet mystery comes to break the frozen lake in me" emphasises that the storm has taught her a lesson and reassured her. That quote is symbolic in that the poet has been frozen away from her own country so that the arrival of the hurricane can help "break the ice" and allow her to live more comfortably in her new home. In Seamus Heaney' s poem he uses lots of imagery like he describes the island as "wizened" which first appears to be a complaint but however, ironically this turns out to be a blessing as the storm approaches "there are no stacks or stooks that can be lost". ...read more.

The mood is mostly scary and unpredictable just like the storm. In Seamus Heaney's poem and Grace Nichols poem there is no regular rhyme scheme which shows how unpredictable the storm is. In Grace Nichols the Rhythm at the start of the poem emphasises her wondering how there is a hurricane in England. The whole poem tends to have a musical rhythm which emphasises the Caribbean language that makes it more realistic, this rhythm makes the poem more conversational. The speed is fast which enhances the enjambment, However for the first line stanza the rhythm slows to emphasis her turmoil. The rhythm also slows in the final stanza to show her relief and happiness. Neither poem's follows a regular rhyme emphasising the storm's unpredictability which emphasises the iambic pentameter in Heaney's poem. In conclusion both poems are similar because they are both about nature's power and the destruction it can cause. They are both also very similar because they show unpredictability of Mother Nature. They both use many similar poetic techniques but for different reasons. Essentially Nichols poem is more personal as it explains how the hurricane affected her emotionally. My favourite poem was Seamus Heaney's because it had a lot better descriptions and I found it more interesting and exciting. ...read more.