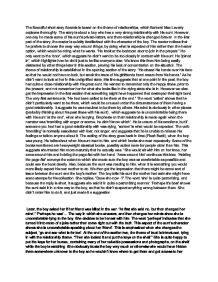 Secrets. The Beautiful short story Secrets is based on the theme of relationships, which Bernard Mac Laverty explores thoroughly.

The Beautiful short story Secrets is based on the theme of relationships, which Bernard Mac Laverty explores thoroughly. The story is about a boy who has a very strong relationship with his aunt. However, one day he reads some of his aunt's private letters, and there relationship is changed forever. In the first part of the story, the reader is quickly familiarized with the character of the boy. The reader notices that he prefers to choose the easy way around things, by doing what is expected of him rather than the harder option, which would be doing what he wants. "He knelt at the bedroom door to join in the prayers." He only went to the 'door', which suggests he didn't want to be too closely in contact with his aunt. He 'joined in', which highlights how he did it just to be like everyone else. We know this from him being easily distracted by other things later in this section, proving his lack of concentration on the situation. The theme of relationship is established in the opening section of the story. "He closed his hands over his face so that he would not have to look, but smelt the trace of his girlfriends hand cream from his hands." As he didn't want to look at her in this undignified state, this line suggests that at one point in the past, the boy had quite a close relationship with his great aunt. ...read more.

"Then she locked it and put the keys on the shelf." She is quite happy to put the keys for her bureau, containing many of her valuable possessions and photographs, on the shelf while the boy is watching. She obviously trusts the boy very much or otherwise she would have hidden them somewhere unknown to the boy so he wouldn't know where to get them and get access to her bureau. As the story continues, we realize that something happened between the boy and the aunt that destroyed their relationship. We already know that the aunt kept some of the letters in her bureau very private, and trusted the boy wouldn't go and read them. "He stood in front of the bureau wondering, and then he reached for the keys." This is the beginning of the boy's breakdown of trust. The verb 'wondering' shows he was thinking deeply about whether he should open the bureau or not. The two words 'stood' and 'wondering' together, suggest he thought for quite a long time and he didn't just open it straight away. This makes his character more realistic, as even though he knew his aunt would be extremely annoyed, and he knew how close their relationship was, he couldn't help himself doing it. This is something that many people would be able to relate to, as once you know you aren't allowed to do something; it makes the urge to do it even greater Once the boy starts reading the letters, he discovers one of them ends with, "I love you, John". ...read more.

The dash in her reply shows that the When the boy asks his mother if the aunt had said anything about him before she died, she replies, "'Not that I know of - the poor thing was too far gone to speak, God rest her.'" The dash in her reply shows that the response to the boy's hope that she might have said something about forgiving him is final, and that she definitely did not say anything about him. "Tears came into his eyes for the first time since she had died and he cried silently into the crook of his arm... that she might forgive him." This conveys the boy's stream of consciousness. He cried 'for the first time since she had died', which suggests that up until this point, he had never given up hope that she might have forgiven him, but now he knows that she didn't, it will be something that he will have to live with for the rest of his life. In conclusion, Bernard MacLaverty's short story "Secrets" explores the theme of relationships extremely well. He highlights that no matter how strong a relationship is between two people, if one of them ever betrays the other, then they can never undo their actions or escape from what has been done. Most importantly, he conveys how fragile relationships are, and once they have been broken, it is sometimes very hard for them to be mended. ...read more.