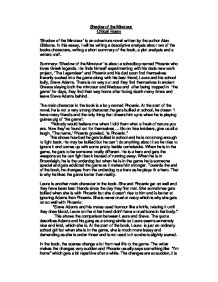 Shadow of the minotaur essay

Shadow of the Minotaur Critical Essay 'Shadow of the Minotaur' is an adventure novel written by the author Alan Gibbons. In this essay, I will be writing a descriptive analysis about two of the books characters, writing a short summary of the book, a plot analysis and a writers craft. Summary: 'Shadow of the Minotaur' is about a schoolboy named Phoenix who loves Greek legends. He finds himself experimenting with his dads new work project, 'The Legendeer' and Phoenix and his dad soon find themselves literarily sucked into the game along with his best friend, Laura and his school bully, Steve Adams. There is no way out and they find themselves in ancient Greece slaying both the minotaur and Medusa and after being trapped in 'the game' for days, they find their way home after facing death many times and leave Steve Adams behind. ...read more.

When he is in Brownleigh, he is the underdog but when he is in the game he is someone special and gets addicted the game as it makes him stronger. Towards the end of the book, he changes from the underdog to a hero as he plays the hero. That is why he likes the game better than reality. Laura is another main character in the book. She and Phoenix get on well and they have been best friends since the day they first met. She sometimes gets bullied when she is with Phoenix but she doesn't rise to him and is better at ignoring Adams than Phoenix. She is never cruel or nasty which is why she gets on so well with Phoenix: "Steve Adams and his mates used humour like a knife, twisting it until they drew blood, Laura on the other hand didn't have a cruel bone in her body." ...read more.

The Novel is written very descriptively and the novel starts very tense: "The first of the beasts roars almost tore the flesh from his bones" (Page 1) I think this is effective as you are involved with the book straight away and you really want to know what happens next so you can't put the book down. It describes in so much detail you can really imagine how much fear is going through the person there and you can almost feel like you are there. The writer also describes scenes in great detail so It makes them more interesting and you can easily picture the place were they are. In this essay, I have written about the book 'Shadow of the Minotaur' and described two of the main characters in the book and written a writes craft. I thought the scenes in Brownleigh we a bit boring as nothing really happens but the scenes in Greece in the minotaur's cave were better as they were a bit more descriptive. Overall, I'd rate the book 4/10. 786 ...read more.

There are strengths to this essay. The student has effectively made a range of points, selected appropriate references from the text and explored the effect of the writer's craft. As a rule of thumb it is useful to ensure that you use the writer's name as you describe the writer's technique or craft. It serves to remind you that you are talking about choices that the writer has made and ensures that you are writing critically and analytically rather than just describing what you read.