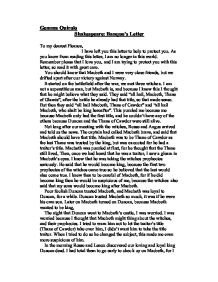 Gemma Quirolo Shakespeare: Banquo's Letter To my dearest Fleance, I have left you this letter to help to protect you. As you know from reading this letter, I am no longer in this world. Remember please that I love you, and I am trying to protect you with this letter, so read it with great care. You should know that Macbeth and I were very close friends, but we drifted apart after our victory against Norway. It started on the battlefield after the war, we met three witches. I am not a superstitious man, but Macbeth is, and because I knew this I thought that he might believe what they said. They said "all hail, Macbeth, Thane of Glamis", after the battle he already had that title, so that made sense. But then they said "all hail Macbeth, Thane of Cawdor" and "all hail Macbeth, who shalt be king hereafter". ...read more.

I knew then to be careful of Macbeth, for if he did become king then he would be suspicious of me, because the witches also said that my sons would become king after Macbeth. Poor foolish Duncan trusted Macbeth, and Macbeth was loyal to Duncan, for a while. Duncan trusted Macbeth so much, it was if he were his own son. Later on Macbeth turned on Duncan, because Macbeth wanted to be king, The night that Duncan went to Macbeth's castle, I was worried. I was worried because I thought that Macbeth might thing about the witches, and their prophecies. I tried to warn him not to let the traitor's title (Thane of Cawdor) take over him, I didn't want him to take the title traitor. When I tried to do so he changed the subject, this made me even more suspicious of him. In the morning Rosse and Lenox discovered our loving and loyal king Duncan dead. ...read more.

I think he was lying, the guards didn't kill Duncan, Macbeth did. He framed the guards for Duncan's murder, and then killed the guards so they couldn't argue with Macbeth's word. Fleance, after reading this letter you must destroy it immediately. You must never go anywhere alone, Macduff is the only person you can trust. You can trust Macduff because he is true to the rightful king. Whenever Macbeth does anything, like banquets, then he stays away. This shows that he believes what I am saying, and so should you. By now Macbeth will be looking for you, so be aware of this new danger. I shall leave this world with a thought of you in my mind. Follow my words carefully Fleance, as you read earlier my sons shall be king, as the witches prophesised. Be careful of the witches word Fleance, do not take then too seriously. Remember Fleance, those who live by the sword die by the sword. All my love, From you father, Banquo ...read more.