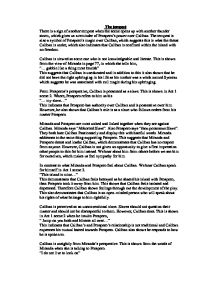 Shakespeare has made Caliban the most violent and savage character, but has also given him some of the most beautiful lines in the play to show that he has two sides to him, a split personality. And that he is not exactly as evil as what other people perc

The tempest There is a sign of another tempest when the scene opens up with another thunder storm, which gives us a reminder of Prospero's power over Caliban. The tempest is also a symbol of Prospero's magic over Caliban, which suggests this is what the threat Caliban is under, which also indicates that Caliban is confined within the island with no freedom. Caliban is viewed as some one who is not knowledgeable and literate. This is shown from the view of Miranda in page 77, in which she tells him, "... gabble like a thing most brutish" This suggests that Caliban is uneducated and in addition to this it also shows that he did not have the right upbringing in his life as his mother was a witch named Sycorax which suggests he was associated with evil magic during his upbringing. From Prosperos's perspective, Caliban is presented as a slave. This is shown in Act 1 scene 2. Where, Prospero refers to him as his "... my slave..." This indicates that Prospero has authority over Caliban and is possessive over him. However, he also shows that Caliban's role is as a slave who follows orders from his master Prospero. Miranda and Prospero are most united and linked together when they are against Caliban. Miranda says "Abhorred Slave". Also Prospero says "thou poisonous Slave". They both hate Caliban Passionately and display this with hateful words. ...read more.

This shows the theme of magic and trickery, which shows the impact and power that Prospero has over Caliban. Caliban is sometimes compared to other animas, this is shown in Act 1 scene 2, where Prospero refers to him as "thou tortoise!" and "poisonous slave". This suggests that Caliban has animalistic traits and resembles animals which makes the audience think that Caliban is not totally human. In addition to this Caliban's mother Sycorax was a witch which also demonstrates that Calibans appearance is ugly. Caliban's mother being a witch suggests Caliban is ugly, as witches are ugly and unattractive. Calibans first speech is "theres wood enough within." Shakespeare has him speak off stage, before he appears to create a dramatic effect. This keeps the audience in suspense, as they still don't know what he looks like. His first speech also suggests that he is anticipating another instruction. Although Caliban is associated with the lowest of the low. This is not what he is all about. Caliban sometimes speaks poetic language "I cries to dream again" this is shown in Act 2 scene 2. This demonstrates that he speaks beautiful poetic language and also it indicates he has a sensitive side to him. Our opinion of Caliban changes as our view of a savage deformed slave does not exactly qualify our views on Caliban's role. Caliban, speaking the most beautiful lines in the play tells he is an sensitive person. ...read more.