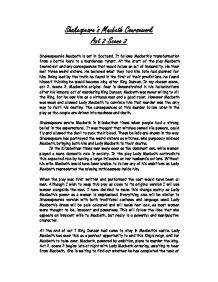 Shakespeare's Macbeth Coursework Act 2 Scene 2 Shakespeare's Macbeth is set in Scotland. It follows Macbeth's transformation from a battle hero to a murderous tyrant. At the start of the play Macbeth feared evil and any consequences that would follow an act of immorality. He then met three weird sisters. He believed what they told him fate had planned for him. Being lead by the truth he found in the first of their predictions, he found himself thinking he would become king after King Duncan. In my chosen scene, act 2, scene 2, Macbeth's original fear is demonstrated in his hallucinations after his immoral act of murdering King Duncan. Macbeth was never willing to kill the King, for he saw him as a virtuous man and a good ruler. However Macbeth was weak and allowed Lady Macbeth to convince him that murder was the only way to fulfil his destiny. The consequences of this murder follow later in the play as the couple are driven into madness and death. Shakespeare wrote Macbeth in Elizabethan times when people had a strong belief in the supernatural. It was thought that witches owned vile powers, could fly and allowed the devil to suck their blood. These beliefs are shown in the way Shakespeare has portrayed the weird sisters as witches, who purposely mislead Macbeth, bringing both him and Lady Macbeth to their deaths. In the Elizabethan times men were seen as the dominant s*x, while woman played a more domestic role in society. ...read more.

The owls 'scream' and the crickets 'cry.' Both these words can be related to how someone being murdered would sound and both animals in Elizabethan times were related to death. It is clear that all both Macbeth and his wife can think about is what has just happened. Macbeth is finding it difficult to cope with the psychological consequences of what he has done. He thinks he is hearing voices and that some one has woken and found out what happened. Lines 14-23 are not written in verse but in continuous prose. The short abrupt questioning that takes place here shows how edgy and anxious they are. These words will be spoken quickly and quietly to emphasise the secrecy of the pair. The audience will be able to see Macbeth fully when he walks towards Lady Macbeth standing in the light. They will be able to see his remorseful, terrified face and really empathise with him. He will appear to them as a weak man lead by his wife, who although has no power in society, has great control over her husband. The conversation in this scene between Macbeth and his wife is important because it starts to show the audience his instability. Later on in the play the audience will be able to watch as Macbeth and his wife change and relate it back to where it all started at the beginning of the play. In this scene Lady Macbeth maintains power and control, whilst Macbeth appears weak. ...read more.

Lady Macbeth became unable to handle all the pressure of knowing about or taking part in murders throughout the play and ending up similar to the way Macbeth was in this scene. On the other hand Macbeth learnt throughout the play to control his fears and near the when the shrieks of Lady Macbeth were heard the audience see how he has changed. Shakespeare has created themes that run throughout the play. The main theme of this play, and also of this scene is evil. In Act 2 Scene 2 evil is represented by darkness. Light and darkness is a theme that is used in this scene in both text and staging. The characters refer to night and sleep, while the stage has little lighting, making it appear dark. The idea of crime and punishment is also present in this part of the play. Macbeth murdered someone and was punished. Most of the themes within Macbeth are based on good against evil and that the consequences of evil are not desirable. The dramatic way Macbeth was affected is shown through his directions of voice, movement and in the text. He moved slowly, never really focusing on anything but the blood, he also lost control of his actions as he lost control of his mind. Overall I think the directions written for this scene are effective in portraying the images created in this scene. The dark stage echoes the theme of night, good and darkness, evil, while Macbeth's anguish is clear through his actions. The balance of power in this scene is also made clear in this scene with Lady Macbeth shown as a strong character. 5 March 2001 By Katie Reynolds 10JA ...read more.