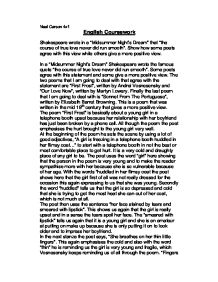 Shakespeare wrote in a &quot;Midsummer Night's Dream&quot; that &quot;the course of true love never did run smooth&quot;. Show how some poets agree with this view while others give a more positive view.

The poet then describes the beads in the girl's hair as "glass beads". "Glass" sounds very cheap and this goes along with the "smeared lipstick " again making the girl sound very young and vulnerable. At the beginning of the third stanza the poet states the title again, "First Frost". This is an example of alliteration which emphasizes it, and the poet uses this title because it Is symbolising that it is the first time the girl has ever been hurt in a relationship and unfortunately she will probably be hurt in a lot more relationships, "beginning losses" and "start of winter" tells us that. All through this poem the poet keeps the length of the liners short, this emphasizes everything he is saying. Martyn Lowery who wrote "Our Love Now" also agrees with Shakespeare's statement. In this poem there are two angles to each stanza - the males side and the females side. He uses a series of images to emphasize what is going on. In the first stanza he uses the image of a wound. The male says "observe how the wound heals in time", meaning that something bad and painful has happened in the relationship but eventually it will pass and everything will be fine. ...read more.

All showing that "the course of true love never did run smooth". Finally I am going to deal with a poet that has a more positive view on the relationships, Elizabeth Barret Browning, who wrote "Sonnet From The Portuguese" which she wrote in the mid 19th century. At the beginning of the poem the poets asks a question "How do I love thee?" and the rest of the poem is spent answering that question. Obviously Browning is talking about her husband Robert Browning. This poem is a very personal one the way she uses the words "thee", "me" and "you" quite often. The poet also uses the word "love" ten times in this sonnet. This emphasises her love for Robert. She also uses lines like "I love thee to the depth and breadth and height of my soul" to express her love. This is a very definite, incredible statement, which shows that her love is infinite. The poem ends on a very triumphant note, "I shall but love thee better after death". This shows that Elizabeth Barret Browning has a more positive thought about love. Obviously there are a lot more poems that deal with the subject of love in the world; I have only dealt with three of them. Neal Carson 4x1 ...read more.