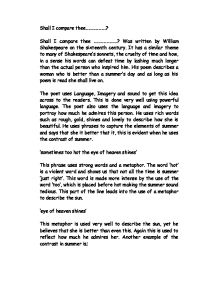 Shall I compare thee...................? Shall I compare thee ......................? Was written by William Shakespeare on the sixteenth century. It has a similar theme to many of Shakespeare's sonnets, the cruelty of time and how, in a sense his words can defeat time by lashing much longer than the actual person who inspired him. His poem describes a woman who is better than a summer's day and as long as his poem is read she shall live on. The poet uses Language, Imagery and sound to get this idea across to the readers. This is done very well using powerful language. The poet also uses the language and imagery to portray how much he admires this person. He uses rich words such as rough, gold, shines and lovely to describe how she is beautiful. He uses phrases to capture the elements of summer and says that she it better that it, this is evident when he uses the contrast of summer. ...read more.

He personifies the sun by using the word 'his'. This gives the sun human attributes and makes us more familiar with his theme. He uses some strong and violent words through out the sonnet to describe the weather, he uses a contrast of words; rough, hot, death and too short. These words are negative and he uses them to describe the unpredictability of a summer's day. He uses words like; lovely, gold, fair, shines and eternal. These are positive words and describe not only the positive things about a summer's day, but the word eternal talks about her and how she will live forever in his words. The poet uses sounds effects such as alliteration and assonance. These sound effects create a gentle soft sound and make her better than all these rough violent words. Alliteration is used in 'sommer shall' and assonance is used in 'loose possession'. ...read more.

rhymes. The rhythm through out the sonnet is when a stressed syllable follows an unstressed syllable occurring five times within a line. This is most evident in the couplets at the end of the sonnet. These words are; long, see, this, life and thee. These words are very stressed and they give the message of the whole sonnet. The tone in the sonnet changes, in the octave the tone is negative and is describing a summer's day this is portrayed by the use of words like; rough, hot and short. The tone then changes at the turn and becomes lighter. In the sestet the poet is writing about the woman so the tone is positive, this is seen when he uses words like; eternall. faire and not fade, these bring a happy tone to the sonnet. The sonnet 'shall I compare thee...........?' shows us that he thinks this woman more beautiful than any summer day, it shows his great admiration for her and as long as the sonnet is read she will remain alive. ...read more.