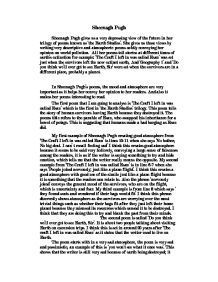 Sheenagh Pugh gives us a very depressing view of the future in her trilogy of poems known as the Earth Studies.

Sheenagh Pugh Sheenagh Pugh gives us a very depressing view of the future in her trilogy of poems known as 'the Earth Studies'. She gives us these views by writing very descriptive and atmospheric poems subtly conveying her opinion on world pollution. All her poems tell stories at different times of earth's extinction for example: 'The Craft I left in was called Esau' was set just when the survivors left the now extinct earth, And 'Geography 1' and 'Do you think we'll ever get to see Earth, Sir' were set when the survivors are in a different place, probably a planet. In Sheenagh Pugh's poems, the mood and atmosphere are very important as it helps her convey her opinion to her readers. And also it makes her poems interesting to read. The first poem that I am going to analyse is 'The Craft I left in was called Esau' which is the first in 'the Earth Studies' trilogy. This poem tells the story of human survivors leaving Earth because they destroyed it. ...read more.

I think this is set in around 20 years after 'The craft I left in was called Esau' as it states that the writer used to live on Earth. The poem starts with in a very sad atmosphere, the poem is very sad and pessimistic, an example of this is 'you won't see what it once was'. This shows that the writer is still very sad because of earth being destroyed; it conveys the writer's opinion and sensitivity very well. From line 11 the poem does not create much atmosphere but it does use very beautiful descriptive language to create an overall happy mood. The start of this is 'But if you see some beautiful thing' But signals that there is going to be a change to the mood of the poem. It also starts using very uncommon words such as damascened (which means: something is decorated by inlaying or encrusting a pattern) and iridescence (which means: spectrum of luminous or shimmering colours). One of the best examples of description I have ever read in a poem is 'look at it as if you were made of eyes, as if you were nothing but an eye, lidless and tender. ...read more.

My last example is from line 28 until the end. 'I saw it one day in passing; it was a few years old. Just an offshore island, a stony outline softened with lichen. Someone said that's Surtsey, and I said fancy that, but I hadn't time to look properly' Conclusion I think that Sheenagh Pugh is a very effective writer, but I do not think that she is that good a poet because I usually associate poetry with Rhyming words. I personally think that she should think of becoming a proper author and that she should convert her poems into short stories. I think that she is very effective at describing things and adding her own feelings. I think that in her fist poem 'The craft I left in was called Esau' that she was very good at creating atmosphere and tension. In the other two poems, she was great at describing images. I agree with her that we are careless with resources and that someone will have to come up with an answer soon. I think that the second poem 'Do you think we will ever get to see earth, sir' was my favourite poem as it had lots of description. ...read more.