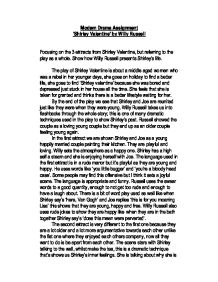 Modern Drama Assignment 'Shirley Valentine' by Willy Russell Focusing on the 3 extracts from Shirley Valentine, but referring to the play as a whole. Show how Willy Russell presents Shirley's life. The play of Shirley Valentine is about a middle aged women who was a rebel in her younger days, she goes on holiday to find a better life, she goes to find 'Shirley valentine' because she was bored and depressed just stuck in her house all the time. She feels that she is taken for granted and thinks there is a better lifestyle waiting for her. By the end of the play we see that Shirley and Joe are reunited just like they were when they were young. Willy Russell takes us into flashbacks through the whole story; this is one of many dramatic techniques used in the play to show Shirley's past. Russell showed the couple as a loving young couple but they end up as an older couple feeling young again. In the first extract we are shown Shirley and Joe as a young happily married couple painting their kitchen. They are playful and loving. Willy sets the atmosphere as a happy one. Shirley has a high self a steam and she is enjoying herself with Joe. The language used in the first extract is in a rude manor but it's playful as they are young and happy. ...read more.

I think that Shirley should go to Greece to have some time so they will realise why they married each other and how important their love is. Willy Russell gets across to us that Shirley is strong by the humour she uses when Joe is shouting at her like 'well it looks like chips and egg, but maybe it's a trick question' The dramatic techniques he uses are ellipses when Joe is angry to emphasise his anger 'I'm-not-eatin'-shite!' We see humour when Shirley is putting up with Joe's anger. We also see strength in Shirley's voice. 'Shirley steps back calmly, but with steel in her voice'. The swearing in this extract is more violent than playful this time; they are a lot me offensive, instead of the odd playful swear word thy are more frequent and more meaningful 'I'm-not-eatin'-shite' In the final extract we are shown Shirley in a Greek market shopping for food, just like she was back at home. We see Shirley on a scooter whilst we hear a voice over where Shirley is talking to Joe on the phone. Voice-overs are a quite common dramatic technique Willy Russell uses throughout the play; it is a sort of commentary on the action. It is a great technique used in appropriate places. Shirley feels happy and free with her new life in Greece just like when her new life with Joe started. ...read more.

Shirley reputes Joe's words with her own meaning. He also shows Joe as a strong character capable of change because when Brian say's 'he's frightened', Joe goes and proves him wrong by going to somewhere different. Russell makes Costas an echo of the person that Joe used to be. In the last few scenes it shows Shirley sat at a table by the sea just like when Shirley arrived at Greece. We see Joe on the beach heading towards Shirley, he gets closer and he 'displays male approval' but he doesn't realise its Shirley. Some people might find some language used in this play offensive but I think it creates the mood and the atmosphere adds comedy to it. Without the language used it would make the play dull and less funny. But not all the language is offensive some is just very playful. Shirley has gone from a young, married, happy, free woman into a depressed, lonely, forgotten woman and finally into a middle aged, free, happy and enjoying life kind of woman and she feels young. Russell has used many varieties of dramatic techniques and this is what creates the story because he uses things like flashbacks that show us Shirley's past, voice-overs that are a sort of commentary on the action, word plays were he changes words to make them sound funny, the way he uses monosyllabic words when Joe is showing his aggression, the copying of words with different meanings and the way he makes Shirley take everything with a pinch of salt. He shows her calm and relaxed. ...read more.