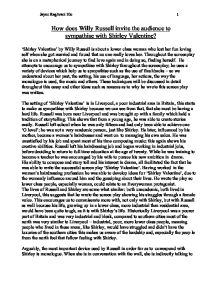 How does w***y Russell invite the audience to sympathise with Shirley Valentine? 'Shirley Valentine' by w***y Russell is about a lower class woman who lost her fun loving self when she got married and found that no one really loves her. Throughout the screenplay she is on a metaphorical journey to find love again and in doing so, finding herself. He attempts to encourage us to sympathise with Shirley throughout the screenplay; he uses a variety of devices which help us to sympathise such as the use of flashbacks - so we understand about her past, the setting, his use of language, her actions, the way the monologue is used, the music and others. These techniques will be discussed in detail throughout this essay and other ideas such as reasons as to why he wrote this screen play was written. The setting of 'Shirley Valentine' is in Liverpool, a poor industrial area in Britain, this starts to make us sympathise with Shirley because we can see from that, that she must be having a hard life. Russell was born near Liverpool and was brought up with a family which held a tradition of storytelling. This shows that from a young age, he was able to create stories easily. Russell left school when he was only fifteen and had only been able to achieve one 'O level'; he was not a very academic person, just like Shirley. He later, influenced by his mother, became a women's hairdresser and went on to managing his own salon. He was unsatisfied by his job and spent most of his time composing music; this again shows his creative abilities. Russell left his hairdressing job and began working in industrial jobs, before deciding to return to full time education at the age of twenty. While he was training to become a teacher he was encouraged by his wife to pursue his new ambition in drama. ...read more.

It gives a hint of Shirley not being a good mother, she doesn't object to him living in a squat but she does the opposite in giving him recommendations of where good squats are, 'If you're goin' to live in a squat ... Somewhere like Woolton - or Childwall' this shows bad motherhood because any good mother would discourage their child from living in a squat and tell them to either find a good house/flat or to come back and stay with them but she does neither. The flashback showing her with her friends shows the Shirley Valentine we all know and love. She is more confident and speaks freely with her friends and make jokes about herself. This showed the part of her life where she wished she had again and also it started showing the time when Joe started becoming 'bored' of Shirley and in his eyes slowly turning her into just another piece of furniture, 'I said 'Joe' I said 'have you ever ... go as well as the Ford Cortina' this shows his ignorance starting to reveal itself and we understand that he thinks nothing of womanly parts and he thinks that it is a type of car. This dictates that Shirley is in need of sympathy because her own husband is ignorant towards her and we can see the start of the process of him becoming the unappreciative, unloving, rude Joe he is in present times. The setting of 'Shirley Valentine' is in the kitchen of a Liverpool house, where it is very dull and boring, pathetic fallacy is used here to reflect the character's mood - Shirley is sad and isolated so the surroundings around her are dull, small and uninteresting. Houses are very small indicating that Liverpool is a poor area and there are many factories and gas towers telling us that it is an industrial area. ...read more.

At the time of her departure she runs away back to where she had been living for the fortnight leaving Jane to go back to Liverpool on her own. We feel that she no longer needs our sympathy now she has 'found' herself and she goes back to see that within a space of probably an hour her new 'lover' is hitting off with another woman. She shrugs it off thinking nothing of it but I think inside she must have felt hurt that she was only a 'thing' that Costas used for his own pleasure. The opening credits are another device used by Russell to invite us to sympathise. They show sketches of a housewife doing work, all day long. These sketches are very dull and drawn in a dark boring colour which reflects the meaning of the picture, the slow dissolve between each sketch indicates the dragging day that passes by doing nothing but work. The music accompanied with the opening credits are slow as well showing the sad life the housewife has to go through, being sung by a female singer this connects the fact that woman in those times were victims of being socially marginalised not being allowed to go out being confined to doing work. The lyrics to the song connect to the life Shirley has - once cheerful, happy, free and then put into a cycle of deprivation by her husband doing the same boring thing everyday. In conclusion, I feel that Shirley Valentine deserves our respect and sympathy in many places throughout the screen play and although she made unwise decisions she is still a person people can reflect to, but some people would disagree that not everyone reflects to Shirley this means that she could not be an Everywoman character - people would feel that that would mean that all woman should go off on holiday and cheat on their husband. ?? ?? ?? ?? 1 Jayen Raghvani 10o ...read more.