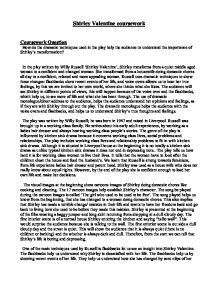 Shirley Valentine coursework Coursework Question How do the dramatic techniques used in the play help the audience to understand the importance of Shirley's transformation? In the play written by Willy Russell 'Shirley Valentine', Shirley transforms from a quiet middle aged woman to a confident and changed woman. She transformed from a housewife doing domestic chores all day to a confident, relaxed and more appealing woman. Russell uses dramatic techniques to show these changes: flashbacks show recent events of her life, and voice overs allows us to hear her true feelings, by this we are invited to her own world, where she thinks what she likes. The audience will see Shirley in different points of views, this will happen because of the voice over and the flashbacks, which help us, to see more of life and what she has been through. The use of dramatic monologue/direct address to the audience, helps the audience understand her opinions and feelings, as if they are with Shirley through out the play. The dramatic monologue helps the audience with the voice overs and flashbacks, and helps us to understand Shirley's true thoughts and feelings. The play was written by Willy Russell; he was born in 1947 and raised in Liverpool. ...read more.

This reveals Shirley's romantic side which you would not guess at. This flashback reveals how the marriage changed and how Shirley is tenser and bored with her life .The flashback of her school days shows her bullying Marjorie. This reveals the reaction he had when first seeing Marjorie again. This explains Shirley's reaction and also tells us what Shirley use to get up to in her school days, a big bully disobeying the school rules. You wouldn't have thought of it Shirley misbehaving, not paying attention in class and bullying a student .The flashback, when arriving to the Greece airport. This flashback shows Jane's betrayal for not doing what they planned and running of with a man. Shirley's encounters with minor characters reveal and twist for the audience. In Liverpool she never really met new or different people so when talking to the tourists in Greece she is saying rude things towards them in her voice overs. Russell's use of minor characters mainly comes into the play in Greece. Shirley dislikes the way holidaymakers are talking about the Greeks; this is probably because she is angry at them for "saving" her from loneliness. The way she just steps up and says, who made the wheel and Jacuzzi. ...read more.

She and Joe will more like they were at the beginning of there marriage. Shirley's character at the end opposite to her character because she is more confident and telling Joe who she is. By the end of the play she discovered her true self by being ready to met Joe again. The dramatic techniques help us to understand Shirley's transformations, because they show us her recent events and what she used to be like in the past. The flashbacks helps the audience know what she used to be like. Without the flashbacks I would have thought that she was always like this but the flashbacks helped me understand more clearly. Shirley has transformed from a misbehaving child to a middle aged housewife doing domestic chores to a loving wife to her husband. Without the transformation the audience would not even really understood Shirley's character as well as do now. We can notice the transformation, because in Greece she has freedom and does what she likes, unlike in Liverpool. The dramatic techniques show us the transformation in Shirley, from being a person doing routine chores to becoming a person free and doing what she likes. We know her transformation after her break in Greece and understand that she is know confident and knows what she wants. ?? ?? ?? ?? ...read more.