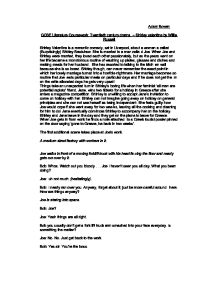 Adam Bowen GCSE Literature Coursework: Twentieth century drama -- Shirley valentine by Willie Russell Shirley Valentine is a romantic comedy, set in Liverpool, about a woman a called (Surprisingly) Shirley Bradshaw. She is married to a man called Joe. When Joe and Shirley were married, they loved each other passionately, but as the years went on her life became a monotonous routine of washing up plates, glasses and dishes and making meals for her husband. She has resorted to talking to the kitchen wall because she is so bored. Shirley though, can never remember the exact point in which her lovely marriage turned into a horrible nightmare. Her marriage becomes so routine that Joe eats particular meals on particular days and if he does not get them on the write allocated days he gets very upset! Things take an unexpected turn in Shirley's boring life when her feminist 'all men are potential rapists' friend, Jane, wins two tickets for a holiday in Greece after she enters a magazine competition. Shirley is unwilling to accept Jane's invitation to come on holiday with her. Shirley can not imagine going away on holiday on general principles and she can not see herself as being independent. She feels guilty how Joe would cope if she went away for two weeks, leaving all the cooking and cleaning for him to do! Jane eventually convinces Shirley to accompany her on the holiday. ...read more.

Joe takes his responsibilities seriously and puts a lot of effort into his business. As time has gone by the business has become more important in his life, making his marriage and his relationship with his children fade into the background. Shirley became pre-occupied with cleaning the house and looking after the children; and Joe became pre-occupied with working hard at his job. This made Joe and Shirley grow apart. When the children left home Joe's job remained important to him and distracted him from his family life, but Shirley was left with no responsibilities any more making her feel empty. As time goes on Joe no longer talks about his feelings. His business is vital to him. If he does not run his business efficiently, he would lose his income, possibly his house, and be unable to support his children. Joe's work life is very emotionless making Joe increasingly unable to express his affection towards Shirley as he gets older. He is the manager of the company (signified by the briefcase) and schedules, times and procedures are very important to him. Work has become everything to him. He has become so involved in managing his company that he uses the same techniques at home as he does at work, 'managing' his wife. He expects his tea to be on the table at a specific time, and he expects specific meals for each day of the week. ...read more.

And yet it disappeared to somewhere, all that fun. And it never came back. I think he just became more pre-occupied with his job as time went on but he was just over the top. I mean just because I gave his dinner to Gillian's dog and gave him egg and chips for a change he threw it in my lap. What kind of a relationship is that hey Rock? A bleedin' one sided one if you ask me. He gives me the orders and I'm expected to do them. No questions asked. Its like I'm one of his colleagues at work. "You cut that piece of wood. You fill out those forms'. She chuckles. Shirley: I mean its like I've broken some major health code violation or something! What a poor old sod though. Actually Rock I'll let you into a little secret. On one condition. You don't tell anyone. I'm...starting to miss him! This scene shows that Shirley finally has realised what Joe has been treating her like. An employee. He has all the authority over her and Shirley thinks this is 'over the top'. Shirley shows here that there is not a mutual respect for one another that exists between them any more. It has become a one sided relationship between them with Joe demanding what he wants. Shirley can still remember though vividly what their relationship used to be like though and this starts to make her miss him. ...read more.