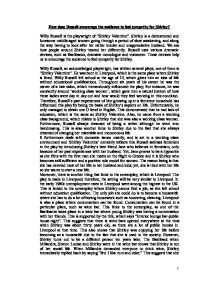 Shirley Valentine-how does Russel encourage the audience to feel sympathy for Shirley?

How does Russell encourage the audience to feel sympathy for Shirley? w***y Russell is the playwright of "Shirley Valentine". Shirley is a disheartened and lonesome middle-aged women going through a period of slow awakening, and along the way having to look after her rather insular and unappreciative husband. We see how people around Shirley treated her differently. Russell uses various dramatic devices, such as flashbacks, dramatic monologue and voiceover. These devices help us to encourage the audience to feel sympathy for Shirley. w***y Russell, an acknowledged playwright, has written several plays, one of them is "Shirley Valentine". He was born in Liverpool, which is the same place where Shirley is lived. w***y Russell left school at the age of 15, which gives him an idea of life without educational qualifications. Throughout six years of his career he was the owner of a hair salon, which tremendously influenced the play; For instance, he was constantly around 'working class women', which gave him a natural instinct of how these ladies were day in day out and how would they feel working in this condition. Therefore, Russell's past experiences of him growing up in a feminine household has influenced this play by being the basis of Shirley's aspects on life. Unfortunately, he only managed to obtain one O level in English. This demonstrated that he had lack of education, which is the same as Shirley Valentine. Also, he came from a working class background, which relates to Shirley that she was also a working class woman. Furthermore, Russell always dreamed of being a writer although he went into hairdressing. ...read more.

This suggests that their relationship has changed; Joe actually thinks Shirley is not attractive any more. This makes us feel sympathy for Shirley because she would be happier if she has married with another man. The use of flashbacks enables us to understand the situation Shirley is in, furthermore allowing us to see how she is feeling. As Shirley quotes "and even though her name was changed to Shirley Bradshaw she was still Shirley Valentine" this communicates to us that she feels that she has fragment and lost her identity. The flashback to her school days demonstrates how the school has a low expectation of her. This is supported by the phrase, which is said by the headmistress. It says "Oh Shirley, do put your hand down. You couldn't possibly know the answer". This shows that the Headmistress thought that Shirley lacked the intelligent to answer the question with the correct answer. This also gives the audience an insight into why Shirley turned out to be a lonely woman. The reason being is that no one was ever there to encourage her; instead her head mistress put her down. This gains the audience's sympathy because the headmistress treats Shirley differently from others when she should treats everyone equally and fairly. Since, this gave a thought to Shirley that what is the point of doing so hard in school when the school doesn't even care about you. w***y Russell demonstrates this process when he shows young Shirley says 'miss it was the wheel! Mans most important invention was the wheel'. ...read more.

Jane treats Shirley as a sister, as she cares about her by paying attention on Shirley. "...you do want to go abroad- you've said so on many occasions. And now you can. That's your prerogative." This phrase shows us that Jane actually memorises what Shirley has said, which is a piece of evidence that she cares about Shirley. Also, by this phrase, Jane is supporting her to go abroad which Shirley wanted the most, but she worries about Joe and whether or not he can be able to look after himself. Jane can be very supportive and caring, whereas, she can also be very selfish. This is because she left Shirley behind by herself whilst she going out with a man on the day when they arrived in Greece. This is supported by the phrase, which says "Oh-Shirley! -can you forgive me? I've been completely selfish..." Jane is trying to ask Shirley for forgiveness for being so selfish yesterday. This makes us feel sympathy for Shirley, as she treats Jane as a real truthful friend, as the first thing she actually concerned is Jane. This is supported by the phrase, which says, "I don't want you to give another thought to me...Give his olives a good pressin!" This tells us that she cares more about Jane than herself, as she has to be alone by herself while Jane enjoying herself. However, Jane actually cares more about herself than Shirley. In conclusion, Shirley has escaped form her miserable, monotonous and sorrowful life and starts to entering a new, colourful and cheerful life. The techniques used in this play have enhanced our understanding of Shirley to a great deal. They have allowed the audience to feel sympathy for Shirley therefore boosted the audience's knowledge of the play. 1 ...read more.