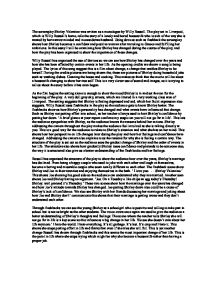 The screenplay Shirley Valentine was written as a monologue by Willy Russell. The play set in Liverpool, which is Willy Russell's home, tells the story of a lonely and bored housewife who is sick of the way she is treated by her narrow minded and inconsiderate husband. Using devices such as flashback the screenplay shows how Shirley becomes a confident and positive woman after traveling to Greece and fulfilling her ambitions. In this essay I will be examining how Shirley has changed during the course of the play, and how the play has been organised to show the importance of these changes. Willy Russell has organised the use of devices so we can see how Shirley has changed over the years and how she has been effected by certain events in her life. As the opening credits are shown a song is being played. The lyrics of this song suggest this is a film about change, a change that enables Shirley to be herself. During the credits pictures are being shown the, these are pictures of Shirley doing household jobs such as washing dishes. Cleaning the house and cooking. This makes us think that the movie will be about a housewife changing to show her true self. This is a very clever use of sound and images, as it is trying to tell us about the story before it has even begun. ...read more.

. . Shirley Valentine.' This shows Joe showing his good side so the audience can understand why they are married. Another seen shows Joe and Shirley having an argument. 'Joe: On a Tuesday o like chips an egg today's Thursday! Shirley: well pretend it's Thursday.' These two scenes show how the marriage over the years has changed and how Joe's attitude towards Shirley has changed. Joe putting Shirley down also could be a cause of Shirley's lack of confidence. We also see Shirley with her friends discussing her marriage and joking about how Joe and Shirley don't' communicate this shows that their marriage is getting worse and they don't understand each other. Through flashbacks we can see the young Shirley as a schoolgirl who is positive and willing to take part in school but is not as bright as the other students. The voice-overs once again are used to give the audience a better understanding of Shirley's thoughts and feelings. The scene where the teacher tells Shirley she will not go far in life is a key scene as this influences a big change in her life. We see she doesn't care about her life anymore.' I hate the world. I hate everything. It's all garbage. It's last. It's crap and I hate it. ...read more.

Shirley Valentine could be seen as an example of Kitchen Sink Drama, as it is about a bored housewife married to a working class husband and shows them in their everyday routine lives. Another connection it has with kitchen sink drama is that, Shirley Valentine shows the problem Shirley has with her relationship and her life. Kitchen Sink Drama is the portrayal of working class or lower middle class life, with an emphasis on domestic realism. Russell uses the conventions of Kitchen Sink Drama for Shirley Valentine but has adapted it for a modern audience in that Shirley does find some fulfillment at the end of the play. At the end if Shirley Valentine we see Shirley has really changed because she has started to make decisions on her own without worrying about Joe. Shirley has become happier, confident, and more independent. As in the last scene we see Joe looking for Shirley.' Shirley: would you like to join me for a drink? Joe: Er.... Thanks.' From the start of the play we learn that Shirley hated herself which caused her to lack in confidence and put less effort into things she does. During the end of the play she starts to like herself and is more confident and comes across as a better person. The structure of the play has shown the gradual change in Shirley's life and by showing the view of more than one person the play also shows the reasons of those changes. ...read more.