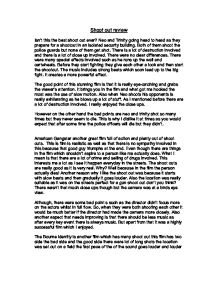 Shoot out review Isn't this the best shoot out ever? Neo and Trinity going head to head as they prepare for a shootout in an isolated security building. Both of them shoot the police guards but none of them get shot. There is a lot of destruction involved and there is a lot of close up involved. There were no clear differences. There were many special effects involved such as he runs up the wall and cartwheels. Before they start fighting they give each other a look and then start the shootout. The music includes strong beats which soon lead up to the big fight. It creates a more powerful effect. The good point of this stunning film is that it is really eye-catching and grabs the viewer's attention. It brings you in the film and what got me hooked the most was the use of slow motion. ...read more.

The shoot outs are really good as it is very real. Why? Well because in the film the person actually dies! Another reason why I like the shoot out was because it starts with slow beats and then gradually it goes louder. Also the location was really suitable as it was on the streets perfect for a gun shoot out don't you think? There wasn't that much close ups though but the camera was at a birds eye view. Although, there were some bad point s such as the director didn't focus more on the actors whilst in full flow. So, when they were both shooting each other it would be much better if the director had made the camera more closely. Also another aspect that needs improving is that there should be less music as after every key event there is always music. But apart from that it was a highly successful film which I enjoyed. ...read more.

Also the music is really as the beats go fast and fast and then after the death it slows down .so it is very suitable. Like all movies there are few bad points this is that the camera zooms in to the actor too much and it loses its focus. Another bad point is that the shooting gets out of control and the location was poor. Overall I would say that American Gangster is the best shoot out because of all its action in the shootout there were many special affects in fact it is more realistic then all off the shoot outs not just its actions made it to the top it was everything because these are most of the thing in everyday life fights, drugs, guns and etc most importantly its structure of the shootout it is really dramatic because the music/beats draw yourself closer as if you are there and goes louder everything something happens. By Jaman 10p ...read more.