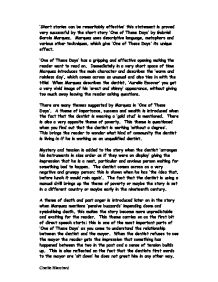 'Short stories can be remarkably effective' this statement is proved very successful by the short story 'One of These Days' by Gabriel Garcia Marquez.

'Short stories can be remarkably effective' this statement is proved very successful by the short story 'One of These Days' by Gabriel Garcia Marquez. Marquez uses descriptive language, metaphors and various other techniques, which give 'One of These Days' its unique effect. 'One of These Days' has a gripping and effective opening making the reader want to read on. Immediately in a very short space of time Marquez introduces the main character and describes the 'warm and rainless day', which comes across as unusual and also ties in with the title! When Marquez describes the dentist, 'Aurelio Escovar' you get a very vivid image of his 'erect and skinny' appearance, without giving too much away leaving the reader asking questions. There are many themes suggested by Marquez in 'One of These Days'. A theme of importance, success and wealth is introduced when the fact that the dentist is wearing a 'gold stud' is mentioned. There is also a very opposite theme of poverty. ...read more.

The dentist seems in control of the mayor, as he stays calm throughout the conversation with his son regarding the mayor. Marquez adds excitement and suspense to the story when the mayor threatens to shoot the dentist while the dentist reaches for his own gun and just replies 'Come shoot me' this also suggests that the dentist has stopped caring and he is very relaxed and calm or maybe he knows that the mayor will not shoot him as he needs his help! The mayor seems desperate with 'a five day old beard' and 'many nights of desperation in his eyes' this brings up the fact that the mayor has been scared to come to the dentist for help and suffered in pain waiting to pluck up the courage to go and see him. The language that Marquez uses is an important aspect of 'One of These Days' making it so successful. Just one example of this is when Marquez replaces the word 'head' with 'skull' bring in the theme of death. ...read more.

Is the dentist fighting a losing battle? The roles of power switch over at the end of the story. Throughout the mayors pain the dentist has had all of the power, but when the treatment is over the mayor regains his power. The mayor comes across as arrogant and careless. When the mayor says 'send the bill' the reader gets the impression that the mayor is not willing to pay for the treatment out of his own money, he seems ungrateful to the dentist. The dentist knows that he will always lose the battles against the mayor he has less power and no matter what he does to the mayor he will always lose! The fact that 'Short stories can be remarkably effective' is greatly backed up by the excellently written 'One of These Days'. It leaves the reader with mixed emotions, anger and hatred for the mayor and sympathy for the dentist. There is so much more to the story that what is written down, from reading 'One of These Days' you come to understand the characteristics and emotions of each character! Charlie Blanchard ...read more.