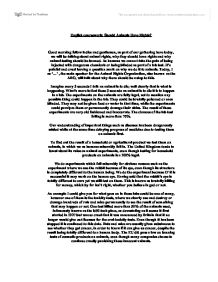 Should animals have rights?

English coursework: Should Animals Have Rights? Good morning fellow ladies and gentlemen, as part of our gathering here today, we will be talking about animal rights, why they should have rights and why animal testing should be banned. As humans we cannot take the pain of being injected with dangerous chemicals or being blinded as part of a lab test. It's painful and cruel leaving a question mark on why we do it to animals. Today, I as '...' , the main speaker for the Animal Rights Organization, also known as the ARO, will talk about why there should be a stop to this. Imagine every 3 seconds I talk an animal is to die; well clearly that is what is happening. What's more is that these 3 seconds an animal is to die it is to happen in a lab. ...read more.

We do experiments which fail miserably for obvious reasons such as the experiment where we use the rabbit because of its eye, even though its structure is completely different to the human being. We do the experiment because IF it is successful it may work on the human eye. Having said that the rabbit's eye is totally different to ours yet we still test on them. This is known as brutally killing for money, which by far isn't right, whether you believe in god or not. An example I could give you for what goes on in these labs could be one of many, however one of them is the toxicity tests, where we clearly use and destroy or damage hundreds of rats and mice permanently to see the result of something that may happen or not. ...read more.

From this we can understand that animal testing is cruel and wrong not to mention the results being no use to us. We also know that rules have been made to prevent such things, however it is still continued and yes programmers such as PETA have been launched yet it still allows animal testing. The pain we feel of being injected harmful substances is not right, leaving the same rule for animals. The chances of us failing the tests in these labs are worse than a coin toss and we should take this into perspective. Hopefully, many of us listening to this speech have understood what i said and look to do something about this. The remaining who obviously think animal test should continue have clearly not looked at statistics (how we fail) and how cruel it is at the same time. Hopefully I have sent a clear message. ...read more.

The response follows typical conventions of a speech, such as the Ã¢â‚¬Å“good morningÃ¢â‚¬Â greeting and the closing conclusion. This is important as it instantly makes the marker aware of the spoken context of the text, allowing marks to be allocated ...

The response follows typical conventions of a speech, such as the Ã¢â‚¬Å“good morningÃ¢â‚¬Â greeting and the closing conclusion. This is important as it instantly makes the marker aware of the spoken context of the text, allowing marks to be allocated accordingly. However, the title of this coursework is Ã¢â‚¬Å“should animals have rightsÃ¢â‚¬Â, yet the candidate only discusses lab-testing. This is therefore indicative of an essay which has reasonable depth but sub-standard breadth. For example, the issue of deforestation could have been included under the guise of an animalÃ¢â‚¬â„¢s right to keep its own habitat. A more appropriate title for this response would be something to the effect of Ã¢â‚¬Ëœlab testing Ã¢â‚¬â€œ right or wrong?Ã¢â‚¬â„¢

The candidate uses a number of examples and statistics, such as Ã¢â‚¬Å“every three seconds an animal is to dieÃ¢â‚¬Â and Ã¢â‚¬Å“a new programme such as PETAÃ¢â‚¬Â. These are effective as they create a more professional tone for the speech and they are also useful in persuading the audience of given points (Argue, Persuade, Advise). However, these examples could have been explored in greater detail. The candidate does not even explain what PETA stands for, thus reducing the effectiveness of these examples as, for all we know, PETA could be a group which has little significance with regards to animal testing. Technical terms such as this should always be explained for the benefit of non-specialist audiences. Were the audience a group of expert scientists, such explanations would be unnecessary.
Unfortunately, the content lacks organisation Ã¢â‚¬â€œ each paragraph is barely distinguishable from the next. Paragraphs should be used to introduce new points within an essay and these points should be summarised in the introduction. For example, Ã¢â‚¬Å“in this essay I will explore government legislation relating to lab-testing, ethical implications and financial factorsÃ¢â‚¬Â. Then go on to present these three different issues in three different paragraphs, allowing the reader to better decipher points being made.

Poor expression renders parts of this speech as being unintelligible. An example from paragraph three beingÃ¢â‚¬Â¦
Ã¢â‚¬Å“our understanding ofÃ¢â‚¬Â¦ diseases has been dangerously misledÃ¢â‚¬Â¦ decaying progress of medicine due to testing them on animalsÃ¢â‚¬Â which is a concept difficult to understand. To remedy this, work to a Point Evidence Explain structure. We could alter the point toÃ¢â‚¬Â¦
Ã¢â‚¬Å“Animal testing has impeded upon the advancement of medicine, as in the famous example of the London morphine disaster (this is fictitious) in which hundreds of people died. This is significant as results gained from animal experiments led directly to the deaths of many individuals.Ã¢â‚¬Â
This response is an example of how spell-check cannot be used as a substitute for proof-reading. For example, although Ã¢â‚¬Å“a new programmed known as PETAÃ¢â‚¬Â has correct spelling, there is clearly a misuse of past-tense verb. In addition to this, numbers such as Ã¢â‚¬Å“3 secondsÃ¢â‚¬Â are used extensively however it would be better to use figures when referring to numbers Ã¢â‚¬â€œ stating Ã¢â‚¬Å“three secondsÃ¢â‚¬Â renders the response as being far more sophisticated. The conclusion is disappointing; statements such as Ã¢â‚¬Å“hopefully, many of usÃ¢â‚¬Â¦ have understood what I saidÃ¢â‚¬Â is extremely patronising. This should be changed to Ã¢â‚¬Å“hopefully, many of usÃ¢â‚¬Â¦ have understood the importance of my given pointsÃ¢â‚¬Â which does not suggest that the audience is unable to understand plain English. Furthermore, mild repetition, such as Ã¢â‚¬Å“hopefullyÃ¢â‚¬Â (x2) in the conclusion and Ã¢â‚¬Å“miserablyÃ¢â‚¬Â (x2) in paragraphs four and five hinder the fluency of the response, as the reader asserts that the candidate is not able to deploy a wide range of vocabulary. Replacing one the above with Ã¢â‚¬Å“it is my intention thatÃ¢â‚¬Â and Ã¢â‚¬Å“comprehensivelyÃ¢â‚¬Â would show a greater command of English.
Despite this, there are a few examples of linguistic devices used effectively, as in the capitalised Ã¢â‚¬Å“IFÃ¢â‚¬Â to reinforce the element of probability and the imperative Ã¢â‚¬Å“imagine every [three] secondsÃ¢â‚¬Â in paragraph two which shows a good control of the audience. Furthermore, contrasting emotive language can be observed in paragraph six with Ã¢â‚¬Å“cruelly punishing these innocent animalsÃ¢â‚¬Â. This is particularly effective as it accentuates the oppressor/ oppressed combination within the response. The candidate clearly has potential to produce coursework to a very high standard. Yet this particular example requires extensive re-writing to achieve this.