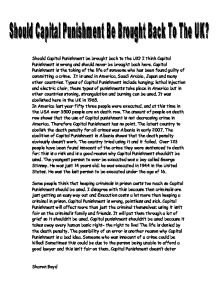 Should Capital Punishment be brought back to the UK?

In fact the shocking truth is it has actually increased! Crime in America is 6 times more than the Crime in Britain! Sometimes people who commit crimes have reasons, like emotional trauma, depression or schizophrenia, and should be helped instead of being put to death. Capital punishment itself is murder, murder, murder! Life value is lowered; Capital Punishment Promotes killing as an OK solution to a difficult problem. It shows society that revenge is necessary to punish wrong doings. Capital Punishment should be banned altogether. Using it is sinking down to a criminals level. For example if a murderer was sentenced to death, the people who agree with the killing of this person are sinking to the criminal's level, they disagree with the murderer's crime yet they agree in the killing of the murderer? Where is the sense in that?! Victor Hugo quotes "What says the law? You will not kill. How does it say it? ...read more.

Desmond Tutu once said"To take a life when a life has been lost is revenge, not justice." This quote is another reason why Capital Punishment should not to return to the UK. Terrorism is much more a threat today than in the '60's, for example September 11th when the twin towers were struck. Some people say that Capital Punishment should be re-introduced because of this. I disagree with this, because Capital Punishment wouldn't work on Terrorists because they are willing to die for their cause in the first place, so taking their life is nothing to them. Also if a Terrorist is executed their terrorist group could retaliate so it is too dangerous. After looking at the different points of view and the evidence for them I definitely disagree with Capital Punishment. It should never be brought back to the UK! It obviously doesn't work in America so why would it work here? We should be moving forwards instead of backwards. It was abolished and it should stay that way! Capital Punishment doesn't work, it's hypocritical and unsafe! Sharon Boyd ...read more.