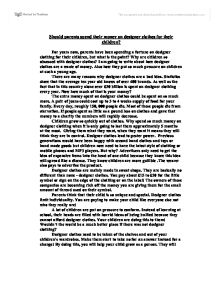 Should parents spend their money on designer clothes for their children?

Children grow so quickly out of clothes. Why spend so much money on designer clothing when it is only going to last them approximately 5 months at the most. Giving them what they want, when they want it means they will think they are in control. Designer clothes lead to pester power. Previous generations would have been happy with second hand clothes and toys or hand made goods but children now need to have the latest style of clothing or mobile phones and MP3 players. But why? Advertisers only need to get the idea of expensive items into the head of one child because they know this idea will spread like a disease. ...read more.

Designer clothes limit individuality. You are paying to make your child like everyone else not who they really are! A lot of children are put on pressure to conform. Instead of learning at school, their heads are filled with horrid ideas of being bullied because they cannot afford designer clothes. Your children are doing this to them! Wouldn't the world be a much better place if there was not designer clothing? Designer clothes need to be taken of the shelves and out of your children's wardrobes. Make them start to take no for an answer instead for a change! By doing this, you will help your child grow as a person. They will thank you in the end for not helping them become self-centred and greedy. Eliminate the disease!... ...Just say no! ...read more.

This answer is very optimistic about the strength of it's own argument; so much so in fact, that it forgets to make a plausible one. As a Response to the Question this is a very good essay, and has provided ...

This answer is very optimistic about the strength of it's own argument; so much so in fact, that it forgets to make a plausible one. As a Response to the Question this is a very good essay, and has provided a systematic argument against the promotion of branded clothing. Where it falls down is that it hasn't regarded their opposition's opinions and often, their own points are fully explored.

The Level of Analysis here provides a well-structured argument, but it feels too often like there are so many points the candidate wishes to write down that they have skimped and saved in fully fattening out their ideas properly, resulting in quantity over quality. Nonetheless, there are marks for content, and many ideas are proposed as to why branded clothing should not be encouraged on children as young as ten, but this argument appears very badly evidenced. In Writing to Argue, made-up facts are allowed so long as they appear plausible - they are effectively showing the candidate has the incentive to carry out external research in order to answer a question. To suggest that "the average ten year old knows of over 400 brands" is a little ridiculous, and to then say that Ã‚Â£30bn is spent on designer clothes per year seems a suspiciously round figure. Glitches like these wear holes in the argument, weighing down what is in fact good about it (mentioning peer pressure and conformity, the outrageous prices, etc.).
However, sometimes the candidate goes all out and their answer simply becomes accusatory: "Parents think that their child is so unique and special. Designer clothes limit individuality. You are paying to make your child like everyone else not who they really are!". The use of second-person address does well to involve the reader, but to pile the blame onto the parent and offer no possible alternative other than to "Eliminate the disease" or provide any counter-argument suggests that this candidate is not entirely familiar with how to construct a balanced argument. When asks to argue a point, all GCSE candidates MUST provide balance, considering the views of another group of people. In this case, it would be the views of Clothing Designers or the parents who buy the clothes for their children, or even the children themselves - that way there is evidence that not everything written is based on the assumptions and opinions of one person (the candidate). Arguments must have sufficient factual sources.
Another irk here is the use of images at the end of the essay. These would have to substituted - very easily and to no extra effort - into the text so, for example, "There are many reasons why designer clothes are a bad idea" instead becomes "There are many reasons why designer clothes like K-Swiss, fcuk, Nike, and Addidas are a bad idea". However, some of the images are completely irrelevant to the argument, and give the impression that the candidate hasn't quite adhered to the question correctly. Brands like Dior, Gucci and Prada are seldom known for their children's clothes lines and so are not as good an example as perhaps Jack Wills, SuperDry and SC&CO would be. Accuracy is very important in an argument - all candidates should note this - you need to at least give the impression you know what you're talking about by sourcing relevant information.

The Quality of Written Communication (QWC) of bordering on average/below average. There are instance where questions are not punctuated with the correct question mark and frequent grammatical errors confusing "you're" and "your". Many spelling mistakes that could easily be corrected with a spelling and grammar checker are made as well. Proof reading is important when in an exam. Successful candidates will be wise to leave 5 minutes towards the end of the exam to check over their QWC.