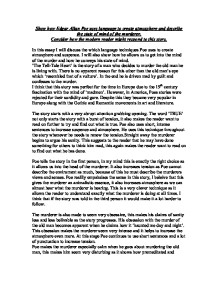 Show how Edgar Allan Poe uses language to create atmosphere and describe the state of mind of the murderer. Consider how the modern reader might respond to this story. In this essay I will discuss the which language techniques Poe uses to create atmosphere and suspence. I will also show how he allows us to get into the mind of the murder and how he conveys his state of mind. 'The Tell-Tale Heart' is the story of a man who decides to murder the old man he is living with. There is no apparent reason for this other than the old man's eye which 'resembled that of a vulture'. In the end he is driven mad by guilt and confesses to the murder. I think that this story was perfect for the time in Europe due to the 19th century fascination with the mind of 'madmen'. However, in America, Poes stories were rejected for their sordidity and gore. ...read more.

The murderer is also made to seem very obsessive, this makes his claims of sanity less and less belivable as the story progresses. His obsession with the murder of the old man becomes apparent when he claims how it 'haunted me day and night'. This obsession makes the murderer seem very intense and it helps to increase the atmosphere even more. At this stage Poe continues to use short sentences and a lot of punctuation to increase tension. Poe makes the murderer especially calm when he goes about murdering the old man, this makes him seem very disturbing as it shows how premeditated and serious the murder is. Also, the fact that the murderer is moving so slowly increases atmosphere and tension. Poe uses repetion of 'very, very slowly' to increase the suspence and to give the scene a sinister atmosphere. He uses this technique a lot during the story mostly to increase tension, however sometimes he uses it to slow down the pace of the story. ...read more.

I think that the part of the story that would have been the most unacceptable in the social scene of america is the part where Por describes how the murderer hides his deed Another technique Poe uses is to adress the reader whenever the tension drops, I beleive that this is a clever way of increasing tension as it makes the reader want to continue to try and discover wht the murderer is talking about. Towards the end of the story Poe uses alot of punctuation, this is unlike the rest of the story so it helps to increase tension and atmosphere. The punctuation helps to give the story more rythym towards the end of the story. Poe uses many language techniques to great effect in 'The Tell-Tale Heart'. He uses most of the techniques to increase tension and suspence, however at one point he uses many of the same techniques to slow down the pace and level the tension. I beleive that he uses all his language techniques at the right moments in the story to give the desired effect. ...read more.