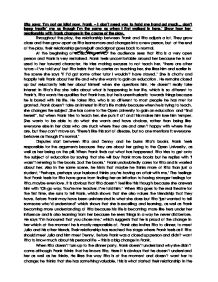 Rita says: 'I'm not an idiot now, Frank - I don't need you to hold me hand ad much... don't keep treatin' me as though I'm the same as when I first walked in here.' Show how her relationship with Frank changes in the course of the play. Throughout the play, the relationship between Frank and Rita adjusts a lot. They grow close and then grow apart as Rita learns more and changes into a new person, but at the end of the play, their relationship gets rebuilt and almost goes back to normal. At the beginning of Educating Rita, the audience sees that Rita is a very open person and Frank is very restrained. Frank feels uncomfortable around her because he is not used to her forward character. He tries making excuses to not teach her, 'there are other tutors - I've told you' but Rita insists that he carries on teaching her, she likes him and earlier in the scene she says 'If I'd got some other tutor I wouldn't have stayed.' She is chatty and happily tells Frank about her life and why she wants to gain an education. He remains closed up but reluctantly tells her about himself when she questions him. He doesn't really take interest in Rita's life; she talks about what is happening in her life, which is so different to Frank's. ...read more.

He likes the way Rita is at the moment and doesn't want her to change; he thinks that she has something valuable, this is what started their relationship in the first place - Rita was different to the other students and he was drawn to her. Denny also leaves her and once again Frank is there for her, he still feels the burden of guilt because Denny had said to Rita 'either I stop comin' here and come off the pill of I could get out altogether.' The fact that Rita is determined to stay on the course and carry on finding herself also shows the devotion she has towards Frank. As I said before, Frank likes the way Rita is at the moment and doesn't want her to change; this is reflected in her essays. What she is producing isn't good and she wants to change - Frank says 'But I don't know if I want to tell you, Rita ... What you have already is valuable.' Frank is scared about losing her, he knows that he has to power to change her and he doesn't want to do it. Rita doesn't see that what she has is valuable; she thinks that she is boring and has nothing. Rita thinks that all the answers will come with an education. ...read more.

She learnt that you need a balance of education and knowledge as well as opinion and character. The last scene shows the audience that the old Rita is still there, although she passes the exam she says, 'Yeh. An' it might be worthless in the end. But I had a choice. I chose me.' She thought that by having an education it would bring her something amazing, but it didn't. The old Rita still there but she is not the same person as she was when she first walked into Frank's office, she has gained a different type of knowledge - and she learnt that she already had knowledge before she started coming to the Open University. In my opinion, I think that they did become distant for a while during the play, but this was caused by many things: the clingy and controlling attitude which Frank had towards Rita; the change that Rita encountered, she learnt how to make decisions for herself and look at things from her own point of view. The new people she met also contributed to their distance. Although they became absent of each other's presence and they were reunited at the end of the play. Every relationship goes through the same stages, sometimes fixing the differences but sometimes things are never the same. Here however they realise how much they mean to each other when they spend so much time apart. ?? ?? ?? ?? ...read more.