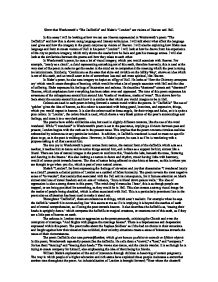 Show that Wordsworth's &quot;The Daffodils&quot; and Blake's &quot;London&quot; are visions of Heaven and h**l.

Show that Wordsworth's "The Daffodils" and Blake's "London" are visions of Heaven and h**l. In this essay I will be looking at how we can see Heaven represented in Wordsworth's poem "The Daffodils" and how this is shown using language and literary techniques. I will talk about what effect the language used gives and how the imagery in the poem conjures up visions of Heaven. I will also be exploring how Blake uses language and form to create visions of h**l in his poem "London". I will look at how he draws from his experience of the city to produce imagery, which truly shows the reader how he feels and gets his message across. I will also look at the similarities between the poems and how they relate to each other. In Wordsworth's poem, he uses a lot of visual imagery, which you would associate with Heaven. For example, 'lonely as a cloud', a cloud representing something not of this earth, therefore heavenly, this is used at the very start of the poem in order to get the reader in the mind set to comprehend the meaning which the poet is trying to communicate. ...read more.

Blake's "London", far from expressing the feelings of elevation and joy that characterise "I wandered lonely as a cloud", presents a dismal picture of London as a symbol of fallen humanity. The poem reveals the most negative sense of "to wander", that namely that associated with the Fall and its consequence, for it focuses attention on Man's almost total loss of moral freedom and on acts of violence, 'Runs in blood down palace walls.' The ides of oppression is also a strong theme in this poem, 'The mind-forg'd manacles I hear', this is as though people are trapped, or are being punished for something, as they would be in h**l. This also creates a strong visual image for the reader of people being shackled, which is often associated with h**l. This is a particularly prominent line in the poem also as alliteration has been used to make it stand out. Throughout "Daffodils", there are references to things, which aren't realistic. For example when he says the daffodils 'stretch'd in never-ending line' this seems to me as if it is implying it is beyond the reaches of earth and of mortal comprehension, as if luring the poet towards heaven. ...read more.

In the last stanza, he tells us that when he is "in vacant and pensive mood," depressed and thoughtful, the daffodils "flash upon that inward eye." That "inward eye" is memory. Memory is the "bliss of solitudeï¿½ï¿½ï¿½µï¿½ï¿½(c)." When we are alone and feeling down, we turn to our memories of happier times to make us feel better. He did not realise the "wealth" of this experience at the time that he had it, but his memory of the daffodils helps heal him. Day dreaming or imagining he is in this earlier, happier emotional place helps him get through the less pleasant times in his life. This poem is about the importance of Nature and memory. They can be tools to aid one during the difficult times of life. Perhaps the "youthful Harlot's curse" is syphilis. This would explain why it "blasts the new born Infant's tear"- syphilis causes blindness in babies born to infected mothers. In addition, the words "blast", "blight", and "plague" are all synonymous with disease. In fact, I believe all three are plant diseases. The last line- "And blights with plagues the Marriage hearse." Carrying my thought through, I think this simply means that the prostitute's customers will become infected and carry the disease into their marriages. Syphilis being a fatal disease, this turns the institution of marriage into carriage for disease and then death. ...read more.