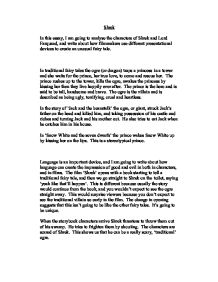 Shrek - In this essay, I am going to analyse the characters of Shrek and Lord Farquaad, and write about how filmmakers use different presentational devices to create an unusual fairy tale.

Shrek In this essay, I am going to analyse the characters of Shrek and Lord Farquaad, and write about how filmmakers use different presentational devices to create an unusual fairy tale. In traditional fairy tales the ogre (or dragon) traps a princess in a tower and she waits for the prince, her true love, to come and rescue her. The prince rushes up to the tower, kills the ogre, awakes the princess by kissing her then they live happily ever after. The prince is the hero and is said to be tall, handsome and brave. The ogre is the villain and is described as being ugly, terrifying, cruel and heartless. In the story of 'Jack and the beanstalk' the ogre, or giant, struck Jack's father on the head and killed him, and taking possession of his castle and riches and turning Jack and his mother out. He also tries to eat Jack when he catches him in his house. In 'Snow White and the seven dwarfs' the prince wakes Snow White up by kissing her on the lips. This is a stereotypical prince. Language is an important device, and I am going to write about how language can create the impression of good and evil in both in characters, and in films. The film 'Shrek' opens with a book starting to tell a traditional fairy tale, and then we go straight to Shrek on the toilet, saying 'yeah like that'll happen'. ...read more.

Lord Farquaad is deceptive because he should only become king if he marries a princess. It is clear that Lord Farquaad doesn't love Princess Fiona, but agrees to marriage because he wants to be king. When a director is making a film it is important that he/she uses a variety of camera angles to create certain effects. At the beginning of the film, Shrek scares the storybook characters away and a close-up is used here to show his big mouth and rotten teeth. Close-up shots are also useful for focusing the viewer's attention on the characters emotions. It shows Princess Fiona and Shrek smiling so we can see how happy they are. This is important so we can get involved with their emotions. Tension is created when Lord Farquaad is introduced. Instead of focusing on his face, the camera shows only his upper body to give the impression that he is tall. When Shrek visits Lord Farquaad's castle, the camera moves from ground level upwards to reveal his tower. This is called a high angle shot. It is useful because it makes Lord Farquaad seem big and powerful, and Shrek and Donkey appear small and inferior. Low angle shots are effectively used because they show Lord Farquaad looking down on Shrek and Donkey. Mid angle shots are used when Shrek and Donkey are relaxing together, and when Shrek has cooked Princess Fiona a meal. These shots show both of the characters at the same time and have the effect of them being together. ...read more.

He does this by jumping on one of the big barrels and making it roll, flattening some of the knights, among other ways. Shrek has a very on/off relationship with Donkey. Donkey looks up to Shrek and wants to be his friend. Shrek, however, finds Donkey very annoying. In the end Shrek stops pushing Donkey away and welcomes his friendship. Donkey makes us believe that Shrek is a good guy by doing things that annoy him, like following him home, running into his house, jumping on his chair and singing through his window. When Shrek doesn't really do anything about it we know that he is not evil. After analysing the characters of Shrek and Lord Farquaad, I have come to the conclusion that although Shrek seems like a traditional ogre he is really a kind, loving soul who has good friends, rescues the Princess without causing much harm to anyone and finds love and gets married. Although Lord Farquaad looks like a Lord, his actions suggest that he is evil. He steals Shrek's swamp and makes him rescue Princess Fiona to get it back, he tortures the Gingerbread Man, rejects the Princess when he finds out he secret and falsely claims kingship. The story of Shrek uses presentational devices to reverse our expectations, so that by the end of the film the viewers know that Shrek is the good guy and Lord Farquaad is the evil guy. Perhaps the message of the story is that you can't judge a book by the cover. ...read more.