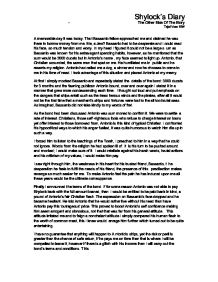 A memorable day it was today. That Bassanio fellow approached me and claimed he was there to borrow money from me. Me, a Jew? Bassanio had to be desperate and I could read his face, so much tension and worry. In my head I figured it could not be a large sum as Bassanio was known for his extravagant spending habits, however, as he mentioned that the sum would be 3000 ducats but in Antonio's name, my face seemed to light up. Antonio, that Christian scoundrel, the same man that spat on me. He humiliated me in public and he resents my religion. Antonio had called me a dog, a sinner and now he chooses to come to me in his time of need. I took advantage of this situation and placed Antonio at my mercy. ...read more.

I forced him to listen to the teachings of the Torah, I preached to him in a way that he could not ignore. Words from the religion he had spoken ill of. It is his turn to be pushed around and mocked; I would make sure of it. I would retaliate against his harsh words, brutal actions and his criticism of my values, I would make him pay. I saw right through him, the weakness in his heart for his trusted friend, Bassanio, the desperation he feels to fulfil the needs of his friend, the presence of this predilection makes revenge so much easier for me. To make Antonio feel the pain he has induced upon me all these years would be the ultimate comeuppance. Finally I announced the terms of the bond. If for some reason Antonio was not able to pay Shylock back with the full amount loaned, then I would be entitled to be paid back in kind, a pound of Antonio's fair Christian flesh. ...read more.

This is bad blood between two religions, if I am not to carry out this task of cutting a pound of flesh from his body then I will understand that a greater force has not allowed me to do so. Now, some may say I'm evil or that I am in fact a person without feelings, but how wrong they are. I am spit upon in public because of the religion I was born to. Did I have any part to play in this decision of nature? From being the victim I must prove myself to be worth more whether it be a hero or a villain. In a sense, I would be both, villain to the Christians and hero to the Jews from my sacred nation, Israel. For this ancient grudge my people have been enslaved and abused. This is where I take my stand. Yours, Shylock ?? ?? ?? ?? Shylock's Diary - The Other Side Of The Story Tejal Vora 10W ...read more.

The title "Shylock's Diary" does not give much guidance on the scope of the task. Here we are given one excerpt from this fictional diary, Shylock's version of the making of the original bond and his thoughts and feelings about it. As such, this makes for an essay that is quite short for a GCSE submission. Either this excerpt could be expanded, or a further excerpt could be written, taking an episode from later in the play.

However, the essay-writer enters very convincingly into the role of Shylock, fitting his thoughts neatly into the events of the first Act of the play.

The standard of writing overall would merit 5 stars if the essay were extended to, say, 1,000 words or more.