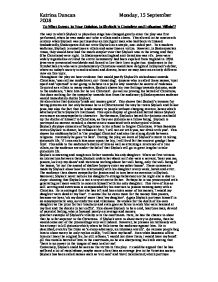 To What Extent, In Your Opinion, Is Shylock 'a Complete and Inhuman Villain'? The way in which Shylock is played on stage has changed greatly since the play was first performed, when he was made out to be a villain and a clown. This altered in the nineteenth century when Shylock was portrayed as an intelligent man who had been victimised. Undoubtedly, Shakespeare did not write Shylock as a simple, one- sided part. To a modern audience, Shylock is sometimes a villain and sometimes a victim. However, in Shakespearian times, they would have had the much simpler view that Shylock was in the wrong and they (The Christians) were right. In Shakespearian England anti- Semitism was rife. Jews were widely regarded as evil and the entire community had been expelled from England in 1290. Jews were persecuted worldwide and forced to live their lives in ghettos. Audiences in the Elizabethan era who were predominately Christians would have delighted in Shylock's defeat, where as today's society is multicultural and diverse, hence we may have an entirely different view on this topic. Throughout the play we hear evidence that would justify Shylock's wickedness towards Christians, 'you call me misbeliever, cut- throat dog'. Anyone who is called these names, 'spat upon' and 'spurned' is not going to behave in a polite way towards the source of rudeness. ...read more.

Shylock is preyed upon by many Christians, but it seems by Antonio, more than any. Indeed Antonio seems to be the source of much of Shylocks' abuse. He has 'disgraced me, laughed at my losses, scorned my nation, thwarted my bargains and heated mine enemies' and his reason, 'I am a Jew'. Antonio also shows that that he has no remorse for what he has said and done to Shylock, he openly states he would 'call thee so again, spit on thee again...'. Here we can see how Shylock can have extra vengeance for Antonio and how no-one could blame him for being angry at this deliberate r****m. When they first meet in the play, Shylock says, 'many a time and oft in the Rialto you have rated me'. This shows how readily Shylock accepts being abused and installs our sympathy in him. It also displays how much Shylock has endured from haters. During the play it becomes obvious that the mistreatment of Shylock comes from Christians, therefore it is understandable that he has a certain loathing for them. In Venice, 'if a Jew wrong a Christian' the Christian will seek revenge. So it seems only fair that 'if a Christian wrong a Jew', then the Jew will take lead and, 'by Christian example' seek revenge too. ...read more.

Furthermore, his only daughter runs away with one of his persecutors. She steals his money and the ring his wife gave him. It seems justified that he should feel betrayed and hurt. Shylock only demanded a bond that Antonio had accepted to. It could be argued that if Antonio was not willing to die, then why did he consent to Shylock's contract in the first place. We can only guess at how Shakespeare intended Shylock to be played. He becomes throughout the play, an increasingly lone figure and is portrayed by Shakespeare to be in some ways very 'human'. Shakespeare could have decided to show Shylock completely defeated at the end of the play, not even to have his religion to hold on to, which would indicate that he was intended to be a villain. On the other hand, I think Shylock was intended to be a victim and was created to challenge the pre- conceptions and ideologies of the Elizabethan era. Also I think that he is not a villain because he inspires too much empathy in an audience. Having said all this, I believe that it is no useful for us to simply categorise Shylock as either victim or villain. Through Shylock, Shakespeare explores the way in which the line between the oppressed and the oppressor can become vague. ?? ?? ?? ?? Katrina Duncan Monday, 15 September 2008 ...read more.