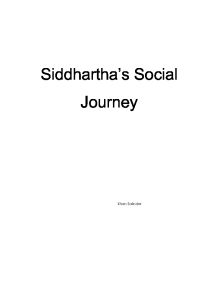 Siddhartha's Social Journey Hermann Hesse's novel Siddhartha is the story of a young man who goes on a journey searching for the purpose of his being. Throughout his journey, Siddhartha meets several different individuals who affect his way of life, and with each path Siddhartha chooses, his social life is greatly affected as he continues to go up and down the social ladder. In his hometown, Siddhartha's social status was very high. He was the handsome Brahmin's son respected and loved by everyone, especially by his friend Govinda who would always follow him as his friend, his companion, his servant, and his shadow. Siddhartha had a good relationship with his father. He respected his father and would always obey him. However, one day Siddhartha decided that he couldn't stay any longer and he disappoints his father with his departure. As soon as Siddhartha leaves the town with Govinda, they are both taken in by the Samanas. As a Samana, Siddhartha's heart was cold to the people of the outside world. ...read more.

It was soon after this, that Siddhartha met Kamala, a courtesan, whom Siddhartha found very beautiful. When Kamala met Siddhartha, she saw him as a poor ignorant Samana from the forest, but when she taught him about the art of love, she found him to be an apt pupil. He was like a child astonished at the knowledge she had given him. Kamala had soon transformed Siddhartha into a man with fine clothes and shoes, and with a scent in his hair. She introduced him to Kamaswami, the rich merchant who taught Siddhartha about business and money. He had been told by Kamala to never be servile to Kamaswami and to treat him as his equal, but Siddhartha treated him even more than his equal. However, Siddhartha didn't find himself very close to Kamaswami. He only found business useful to him in order to bring money for Kamala. He was not passionate about business as Kamaswami was and he treated everyone who came to him equally. ...read more.

When Siddhartha was given to him his son, he took good care of the boy like a good father. Even when the boy would give Siddhartha and Vasudeva a lot of trouble, he would continue to love him until the boy left him. One day when Govinda came to visit the old ferryman whom many people considered to be a sage, he recognized that this old ferryman was Siddhartha, his friend, and when Govinda saw Siddhartha smile, it was the same calm, delicate, impenetrable, wise, thousand-fold smile of Gotama, the Buddha. Govinda knew that the Perfect One smiled. In the end, Siddhartha finds what he had been looking for. He had met many different individuals who had affected his way of thinking and living, and each path Siddhartha chose greatly affected his social life. He had gone from holding a high status to having no status, and now Siddhartha's status was unsure of. To Govinda, Siddhartha was the Perfect One. Many people saw him as a wise man, a magician, or a holy man. Others however saw him as a crazy old man. In the end however, we learn that Siddhartha's social status didn't matter. ?? ?? ?? ?? ...read more.

This is a well-told summary of the book "Siddharta" by Herman Hesse. The main events of the story are covered, especially his meetings with various individuals and groups, and their influence upon him.

Paragraph construction is well-managed, moving us through the different episodes, and sentence construction is mostly well-controlled. There are some errors in tense usage, including some confusing applications of the Present Tense and the Past Perfect within a narrative told mostly in the Past Simple.