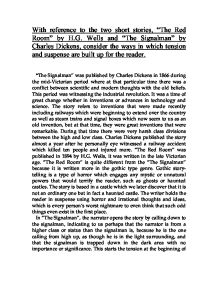 With reference to the two short stories, "The Red Room" by H.G. Wells and "The Signalman" by Charles Dickens, consider the ways in which tension and suspense are built up for the reader. "The Signalman" was published by Charles Dickens in 1866 during the mid-Victorian period where at that particular time there was a conflict between scientific and modern thoughts with the old beliefs. This period was witnessing the industrial revolution. It was a time of great change whether in inventions or advances in technology and science. The story refers to inventions that were made recently including railways which were beginning to extend over the country as well as steam trains and signal boxes which now seem to us as an old invention, but at that time, they were great inventions that were remarkable. During that time there were very harsh class divisions between the high and low class. Charles Dickens published the story almost a year after he personally eye witnessed a railway accident which killed ten people and injured more. "The Red Room" was published in 1894 by H.G. Wells, it was written in the late Victorian age. "The Red Room" is quite different from the "The Signalman" because it is written more in the gothic type genre. Gothic story-telling is a type of horror which engages any mystic or unnatural powers that would terrify the reader, such as ghosts or haunted castles. The story is based in a castle which we later discover that it is not an ordinary one but in fact a haunted castle. The writer holds the reader in suspense using horror and irrational thoughts and ideas, which is every person's worst nightmare to even think that such odd things even exist in the first place. In "The Signalman", the narrator opens the story by calling down to the signalman, indicating to us perhaps that the narrator is from a higher class or status than the signalman is, because he is the one calling from high up, ...read more.

The narrator didn't 'like the two sequences of the accident and the dead girl.' When he talks about the dead girl he is emphasizing uncertainty and bewilderment about the incident. The narrator asks rhetorical questions such as: 'How ought I act', this helps build tension because it makes us think what action should he take. The narrator wonders if he should 'stake his own life,' we are getting hints If this could be a matter of life or death and this increases the tension by making us feel that the problem is increasing and is turning to be deadly. The narrator 'resolved to offer to accompany him to the wisest medical practitioner.' This proves to us that the narrator is thinking rationally and wisely by taking him to a doctor. The narrator states:' it would then be time to go to my signalman's box', the word 'my' informs us that the narrator has dedicated himself to the cause of helping out the signalman. The narrator feels that he 'cannot describe the thrill that seized upon me,' this suggests that the narrator thinks that he is going to see the ghost finally. Also 'thrill' suggests excitement and 'seized' quickens the pace as we are now willing to know even more about the upcoming events. We are now reaching the highest point in the climax. The narrator uses the phrase: 'nameless horror' to express what he observes. He uses the word 'nameless' because he is not quite sure of what he spotted, and uses the rather dark word 'horror' because there is something horrifying from the scene that he glimpses. The phrase 'was not yet lighted,' increases our sense of expectancy, because we are now expecting an event to take place shortly. The narrator uses alliteration when he states: 'flashing self-reproachful fear that fatal mischief had come of my leaving of the man there'. This use of alliteration focuses and concentrates our attention on the fear of death. ...read more.

The writer proves to us that light is winning when he states:' I was now almost frantic with the horror of the coming darkness'. This suggests to us that he is losing control and almost taken over by the darkness. The word 'vanished' is used in the pattern of three, it is repeated three times to highlight the fact that flames or anything related to light are disappearing completely from sight. The writer finally feels that 'Darkness closed upon me like the shutting of an eye', the writer is signifying to us that darkness is taking over in his brain and it is an effective simile because it is as if it is the end of the man's life. When the man recalls 'Then I think I must have staggered to my feet', this proves to us that the narrator wasn't aware of what he was doing, as if he was blinded with fear. This increases the tension because we suspect and almost accept as true that darkness took over at the end. The climax has been reached at this point in the story. As soon as the writer states:' I opened my eyes in the daylight', the tension is gone all of a sudden due to him waking in the daylight and light entering the room and most importantly the fact that he is alive. The odd people think that the man is one of them since he assumes that the room is haunted. Us readers and the old people are wondering what the writer means when he first said that the room was haunted but without ghosts. Tension is building up again as we reach a resolution phase. The writer finally states that fear is what made the room haunted, he even wrote fear in capital letters as if it is a person. Lastly it says:' So long as this house of sin endures;. This suggests that something evil has happened in the house to give such darkness. We are left asking questions at the end as there still remains a bit of tension because we don't get an answer. ...read more.