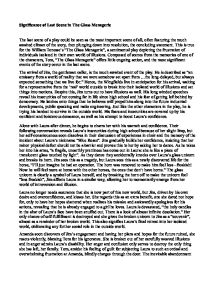 Significance of Last Scene in The Glass Menagerie

Significance of Last Scene in The Glass Menagerie The last scene of a play could be seen as the most important scene of all, often featuring the much awaited climax of the story, then plunging down into resolution, the concluding statement. This is true for the William Tenesse's "The Glass Menagerie", a sentimental play depicting the frustration of individuals isolated in their own world of illusions. Composed of scenes from the memories of one of the characters, Tom, "The Glass Menagerie" offers little ongoing action, and the most significant events of the story occur in the last scene. The arrival of Jim, the gentleman caller, is the much awaited event of the play. He is described as "an emissary from a world of reality that we were somehow set apart from ...the long-delayed, but always expected something that we live for." Hence, the Wingfields live in anticipation for his arrival, waiting for a representative from the 'real' world outside to break into their isolated world of illusions and set things into motions. ...read more.

As he takes her into his arms, "a fragile, unearthly prettiness has come out in Laura: she is like a piece of translucent glass touched by light". As they dance they accidentally knocks over Laura's glass unicorn and breaks its horn. Jim sees this as a tragedy, but Laura sees this as a newly discovered life for the horse, "I'll just imagine he had an operation. The horn was removed to make him feel less -freakish! Now he will feel more at home with the other horses, the ones that don't have horns." The glass unicorn is clearly a symbol of Laura herself, and by breaking the horn off to make the unicorn feel "less freakish", Jim affects Laura in a similar way, allowing her to momentarily emerge from her world of introversion and illusion. Laura no longer needs assurance that she is now part of this new world, but Jim, driven by his own desire and overconfidence, and kisses her. ...read more.

There is nothing heroic or even positive and challenging in his departure. Tom is just like the other characters in the play, trapped in the ordinary and terrifying situation of struggling to survive in a world that gives them no sensible reason for existence. Clearly the seventh and final scene of "The Glass Menagerie" is the most eventful and important scene of all. Hence the arrival of the long awaited gentleman caller Jim, the introverted young girl is given the chance to emerge from her illusionary world of glass, and the already strained bonds of the family receive the last shattering blow with the departure of Tom. The audience discovers that the "emissary from the outside world" is a state equally illusionary to that of the Wingfield family, and that Tom's search for adventure and self-fulfillment is futile. Through these realizations in this last significant scene, Williams reveals to the audience the frustration of humans trying to find their place in the harsh reality, the struggle to exist in such a world. ...read more.