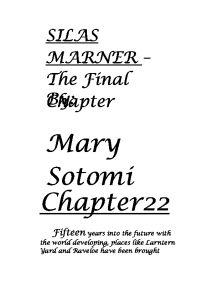 SILAS MARNER - The Final Chapter By: Mary Sotomi Chapter22 Fifteen years into the future with the world developing, places like Larntern Yard and Raveloe have been brought down and industries have been built in place. The children of most of the villagers in Raveloe left because they could not take the innovation while the others stayed behind, Silas Marner, Aaron and Eppie Winthrop were one of the people who felt they should not leave under any circumstances since it would be difficult building a new life elsewhere but accept the changes but learn to live with it for they may come to like it; the city with new houses and buildings, large shopping centres was like a new city reborn. The Kimble's, Lammeter's and the Osgood's also decided to stay in the town and although Mr and Mrs Kimble died fourteen years ago and Priscilla Lammeter passed away two years after the Kimble's death, the Osgood's son; Gilbert still lived here happily married with a son. Raveloe was not like one of those barren parishes lying in the outskirts of civilization but there were plenty of lands that could be used in building structures. The air was quite dense and heavy in the streets at this region in the world. The sun had set and the darkness descending forth with a silence. Suddenly music could be heard from a distance coming nearer and nearer and Eppie was listening to the wonderful sounds from her bedroom window. She listened every night to this same group of people worshipping and praying in the nearby church. They filled her with peace in some way making her reflect and think more. ...read more.

From then on they made such short trips a ritual or a habit as you may call it. "Why did you and Dad decide to call me Silas", her only son asked curiously. Eppie was sure he was getting confused that his name was being said so often. "Well, she began 'apart from the fact it is a beautiful name I wanted never to forget a man who had adopted me as his own child and loved me dearly'. She paused for a little while looking at the children's faces as they pushed closer looking at her lips like they were afraid to miss the next word that came from her mouth. 'Every time, sweetheart I call your name or even look at your face he comes into my mind and then I know I am assured that as long as I live I would remember him and he would always have a special part of my heart'. ~~~~~~~~~~~~~~~~~~~~~~~ Ruby then told Silas that he should not be worried, for their mum loved them all. "She is right you know" a voice answered from the fireplace, there was a chair made of fine cotton and sitting in it was their father. Aaron Winthrop was a family man as much as he did everything in life. That was him: passionate about everything and became the luckiest man to the best of his knowledge when he married the most beautiful young lady Eppie. He loved his family and the fact that he did not regret staying in Raveloe or now London gave him comfort. He was a little bit of an idealist and a realist like vanilla and chocolate mixed as one. ...read more.

After Silas died and Aaron's mother, Dolly Winthrop had also died years before, they decided they had reason to remain in Raveloe to preserve their memories and so stayed even as it became this new place; London. Eppie remembered the look on Silas face when he found out his former home Larntern yard no longer existed. As she and Aaron put the children to bed; Eppie putting the two older ones to bed while her husband put Emily to bed and while he was doing so his daughter asked him to tell her how they met and this time Aaron answered her saying " Well, your mum and I grew up together and she was as pretty as you" .At this his daughter blushed lightly and he continued, "She grew up to be the most beautiful girl in Raveloe and I fell in-love with her and so did she. I asked her to marry me and she agreed and that was your daddy's happiest day". Eppie was lying on the bed with Aaron and they were talking about the day's events; she confided how relieved she was to have shared her life with her father Silas Marner, with the children and Aaron agreed with her. Finally, before they slept Eppie said a powerful sentence. " Silas Marner is a part of me and I would never let him go, day by day and as time passes away I would forever cherish him for saving me from the life I would have had without him. I would forever believe his memory will live on in me as a light on my path and guiding me every step of the way" and then she fell completely silent and you could tell in a few minutes that she was asleep. The end. ...read more.